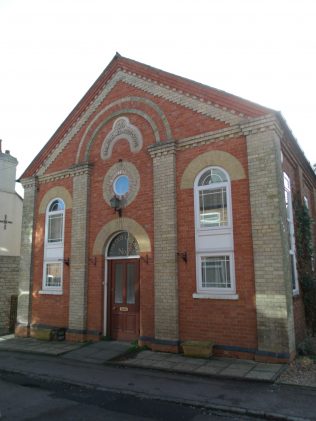 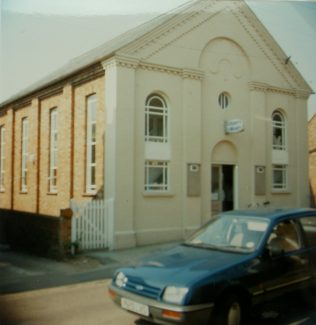 A house or building of Samuel Francis in Woburn Street, Ampthill, Bedfordshire was registered in the Archdeacons Court on 23 May 1840 for worship by the Primitive Methodists. Registration was made by Samuel Francis, Thomas Clements and Henry Alderslade. These three men also registered a house in Bedford for worship the same day and Thomas Clements is described as minister. No return was made for Ampthill PM in The Ecclesiastical Census, Bedfordshire March 1851.

Ampthill is a small market town with a number of elegant Georgian buildings situated on the Greensand Ridge. The town developed during the 19th century, especially when the Midland Railway opened a station.

PM worship moved to a newly constructed Chapel in Saunders Piece. The foundation stone being laid on 7 August 1871 on land sold by George Pyke Robinson. However, this chapel was not registered for worship until Thomas Reeve, PM minister did so on 6 June 1874. Kelly’s Directory of 1890 noted that services were held at 10.30am and 6.30pm together with a Monday evening Prayer Meeting at 7.30pm.

When in 1897, Bedford PM Circuit was divided; Ampthill became part of Bedford II Circuit. The Chapel is recorded in the Bedfordshire Places of Religious Worship list of 1908. However, situated in a narrow side road, Ampthill PM didn’t thrive. There was competition from lively and larger Wesleyan and Union chapels situated more prominently a short distance away in the main Dunstable Road together with churches from a variety of other denominations elsewhere in the town. At its Quarterly meeting on 9 March 1919, Bedford II Circuit agreed to the sale of Ampthill Chapel. Registration for Worship was cancelled on 23 September 1920. The church building became a Cinema, then Ampthill Library.