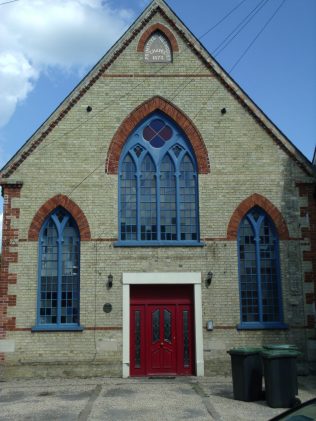 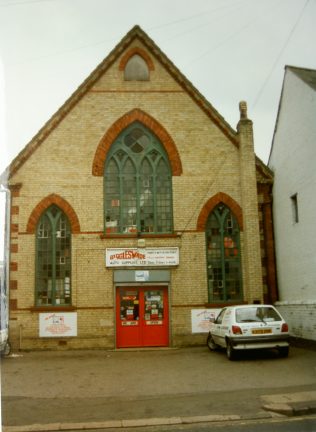 The History of Primitive Methodist Connexion by John Petty states that when in 1847, John Guy ‘and his colleagues extended their labours to Biggleswade’ from Baldock, ‘On the first of the month, Mr Guy preached there three times in the open air to attentive congregations, and with a cheering prospect of success.’ Descriptions are also given of ‘the solemn attention’ being ‘being paid to the Word of Life’; of large congregations in those early days and people ‘convinced of sin’; prayer meetings etc.

On 24 December 1853, Edward Powell, 1 Pembroke Road, Baldock (Herts) minister, (trustee) registered a PM chapel ‘for worship in Short Mead Street’. This registration was in turn cancelled on 31 December 1866 as ‘James Young of Sun Street, Biggleswade, Primitive Methodist Minister ‘made a further registration for worship in a PM Chapel in Shortmead Street on 29 November 1860.

The former PM building still standing in Shortmead Street has the inscription date of 1873. As a result, another registration for worship was made on 8 March 1875 by William Sidebottom, Hitchin Street, Biggleswade, Primitive Methodist minister. This was followed on 20 March 1897 by a registration for Marriages.

Kelly’s Directory of 1898 noted that services at Biggleswade PM chapel were held at 10.30am & 6pm; Wednesday 8pm. The minister then was Rev Bertram Portnell.

The Biggleswade PM Chapel was part of the Hitchin Circuit until 1933 when following Methodist Union, it became part of the new Biggleswade Methodist Circuit. It was renamed Bourne Methodist Chapel in memory of Hugh Bourne to differentiate it from its former Wesleyan Methodist Chapel which became Trinity Methodist Church. However, the final service was held in the Bourne Chapel on 3 April 1939 after which the church was amalgamated with Trinity and registration cancelled.

Looking back at the history of Shortmead Street, Biggleswade by Ken Page