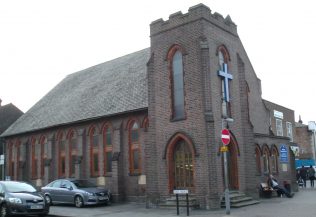 Dunstable Road Primitive Methodist Chapel, Luton was opened in 1905 using a mission church formerly at Mount Tabor Chapel. The Luton News and Bedfordshire Chronicle reported on 9 November 1905 that on the previous Sunday, ‘Rev F Shergold preached at the morning and evening  services to crowded congregations, many persons being unable at night to gain admittance.’ It also reported that a service of song was held in the afternoon and 40 children had been enrolled in the Sunday School. Prior to this from 23 to 4 October 1906 an Evangelistic Campaign conducted by Enoch Milson of Hull had taken place.

Efforts were made to raise funds for a new and bigger church such a concert given by Miss F Davies and her party in 1917. In 1924, the new church situated on the corner of Dunstable and Oak Roads was built. The site was purchased for £500 and the building cost £3750.