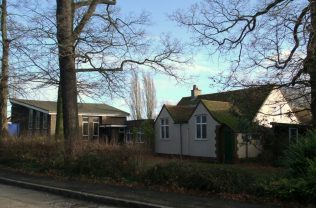 Situated in the Ouse Valley, Oakley is about 4 miles north-west of Bedford.

The 1851 Ecclesiastical Census includes a return for a Primitive Methodist congregation at Oakley made by William Prentice, Steward. This states that the chapel was erected in 1849 and contained 108 Free and 70 other sittings. On Census day the attendances were:

The first confirmed registration for worship of a PM chapel in Oakley was made by John Symonds Gostling, Gwyn St. Bedford upholsterer (trustee) on 8 October 1852. This registration was cancelled when the Chapel was re-registered for worship by William Durrance of Bedford, Primitive Methodist Minister on 15 February 1898. On 4 March 1898, the chapel was then registered for Marriages.

In February 1908 a new Bell-American Cathedral organ was installed and dedicated.  New Sunday School rooms (pictured on the right of the photograph) were built and opened in October 1913. Comprising a ‘central assembly room’, classrooms and kitchen were able to seat 200 scholars and cost c£600. Following this, the chapel was enlarged by removing a dividing wall to take in the old Sunday school room.

The premises were regularly maintained. On Easter Monday 1923 a tea was held followed by a concert given by the choir to help the Renovation Fund. Changes took place in the way in which worship was ordered and conducted. For example The Bedfordshire Times & Independent 5 October 1928 reported that Rev RN Wycherley and the Rev HP Ellis took part in a service in which a communion rail erected in memory of ‘past members and workers was dedicated in the presence of a large congregation’. Oakley also had a lively Band of Hope and Christian Endeavour meeting at the chapel.

Although the Primitive Methodist chapel has been replaced with a modern Methodist church on the same site, the original chapel is pictured on the Bedfordshire Community Archive and Oakley Village websites.