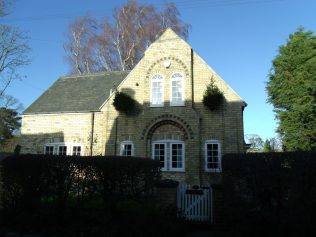 Pavenham is small limestone village situated on the River Great Ouse and known for rush making.

In 1842, Pavenham was noted as a Primitive Methodist preaching place. 10 years later, John Symonds Gostling of Gwyn Street, Bedford, upholsterer registered a building for worship on 8 October. A second registration for Worship was made on 25 March 1859 by Joseph Hulatt of Pavenham, baker. The Chapel stood in the High Street next to ‘The Retreat’. Hulatt was Senior Society Steward in 1884.

However, the PM cause in Pavenham does not appear to have prospered. Consequently, the Bedford Primitive Methodist Quarterly Meeting on 2 December 1884 resolved ‘That this meeting after very careful consideration advises the selling of our Pavenham Chapel and that Mr Pilling see Mr Alexander and Mr Hulatt of Pavenham respecting the sale of the chapel.’ The next Quarterly Meeting gave Rev Jacob Pilling ‘full power to sell Pavenham Chapel and that he get as much for it as possible.’ The September meeting agreed to advertise the sale of the chapel in the ‘Mercury and Standard Papers’. Services were planned in Pavenham in the January to March 1885 quarter, but in October to December Plan 1885, Pavenham is listed, but with no preachers appointed. The 1859 Registration for Worship was not however cancelled until 8 May 1895.

After sale, the Pavenham Chapel eventually became the garage of ‘The Retreat’, but has now been converted into a house.

Pavenham, The Lifestory of a village by Rachel Marchbank