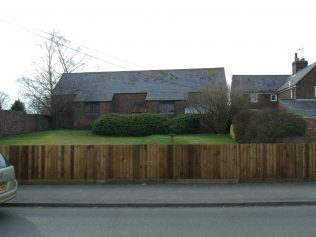 Totternhoe is a Chiltern village situated between Leighton Buzzard and Dunstable.

The first Primitive Methodist chapel in Totternhoe was built in 1861, the site of which is pictured. Registration for worship was made on 22 February 1864 by James Langham, Hightown Luton, minister. Later, Totternhoe became part of the Dunstable PM circuit when this was formed.

The Luton Times and Advertiser 4 June 1870 noted that Totternhoe PM had celebrated its chapel anniversary when services on the Sunday were conducted by Rev GC Pinder who also spoke after the public tea held a day later.

When the condition of the chapel deteriorated, a replacement was built in The Furlong in 1929 at a cost of £611. The building was designed by architect Harold Pickering to seat 72 people.. However, problems were experienced with this building leading to an aborted plan to replace the chapel again. The former Totternhoe PM chapel closed on 23 April 1975 and most of the members transferred to The Square Methodist church, Dunstable.