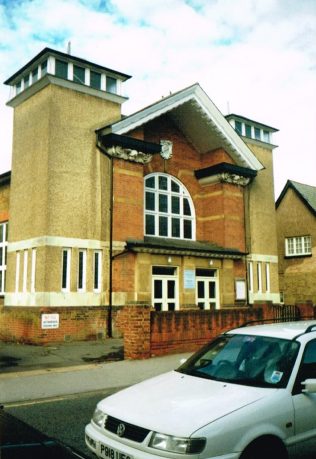 In the first half of the nineteenth century, Chalvey was a small village of around 60 houses.  Primitive  Methodists first met in a house or open air and then in 1854 bought, for £250, a second hand chapel – Zion – from the Congregationalists who were moving to bigger premises.

The Primitive Methodist magazine of August 1854 includes an account by D. Mossop of the opening on Sunday April 25th and following days.  Sermons were preached by Rev G Lamb (London), Rev W Knight (Slough) and Rev J A Miller (Windsor).  The Mayor of High Wycombe, J Hunt Esq chaired a tea meeting in the Temperance Hall, with support from Revs J Mules and W Knight and Mr J Mills.

The chapel, located on Chalvey Road between what is now Martin Road and College Avenue, but what was then  a nursery, was built of brick, 35′ long, 24′ wide and 18′ high.  It is described as “well-pewed (and) has a gallery at one end.”

There was a growing Sunday School and a membership of 20. However, some of their members came from Slough and they felt they should have a chapel of their own. So, in 1877, a small chapel was built in William Street, Slough

As the village continued to grow land was purchased and a new church opened in 1901.   Many Primitive Methodist chapels were simple, almost barn like buildings. This one is rather grander.  For twenty-one shillings (£1.05) you could lay a foundation stone with your name on it; for two and sixpence (12½p) you could lay a stone – but no name.