and some famous Primitive Methodist ministers 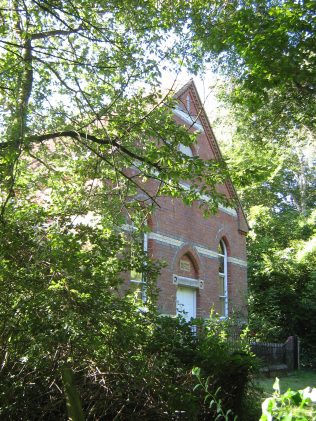 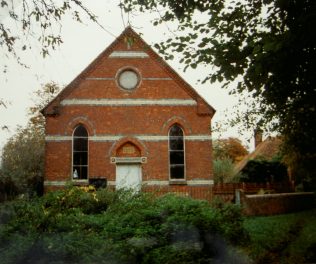 zoom
1872 Quick's Green Primitive Methodist Chapel, Ashampstead, as it was in 1989. It closed in 1971 and became a store. Romantically, it reopened for one day in 1972 to celebrate its Centenary.
Keith Guyler 1989 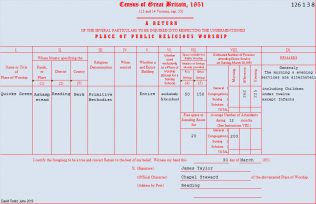 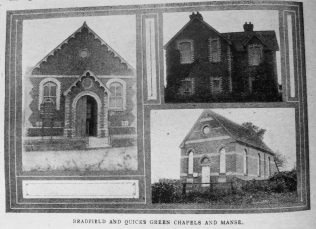 There is enough information about Quick’s Green and the people associated with it to fill a good sized pamphlet, plus puzzles to unravel. Those interested should go to the Berkshire County Record Office in Reading, and read the two biographies of Isaac Septimus Nullis.

In November 1834 John Ride and William Harvey registered as a place of worship “a Chapel and Premises situate at Quick’s Green in the Parish of Ashampstead and now in the holding and occupation of the Primitive Methodist Society.”

It was decided in March 1839 that this chapel “be raised five feet, and a gallery be put in it,” and to set up a Sunday School at Quick’s Green.

The March 1851 religious census records a congregation there of 262 in the afternoon and 225 in the evening. There had been an average morning congregation of 200 over the previous twelve months. This record is signed by James Taylor, Chapel Steward.

Eight months later, in November 1851, Edward Bishop and James Mules (circuit ministers) registered “a Chapel and Premises situate at Quick’s Green in the Parish of Ashamptead and now in the holding and occupation of Adam Clements and others, Trustees for the Primitive Methodist Connexion.” Here is a question I have been unable to answer: Was this a re-registering of the same chapel, or was it a brand new chapel? If a new building, was it on the same site or a different site?

A third chapel, shown in the photograph and now a private house, carries the date 1872 over the door. (It closed in 1972.)

A book called Ashampstead: a Berkshire Parish, published in 2010 by Ashampstead Parish Council, tells us of religious meetings held at Quick’s Green in the cottage of Mrs Ann (‘Nanny’, or ‘Nancy’) Street; these meetings are also mentioned, with a photograph, in Kendall’s Origin and History of the Primitive Methodist Church. It was at these cottage meetings that the evangelist Isaac Septimus Nullis became deeply convinced of his need of Christ, prior to coming to faith in March 1850.

This parish book tells us that the cottage was “close to the original chapel”. Here is more of the mystery: Does it mean the 1834 chapel, or the 1851 chapel, if they were on different sites?

The book also tells us that this third (1872) chapel “was built on the site of an earlier chapel”. Again, does it mean the 1834 chapel, or the 1851 chapel? It adds that “the original chapel looked like a barn and was probably replaced because it was too small for the congregation.”

But that is not the whole puzzle. An 1845 map of the parish shows an Independant (spelled thus) Meeting House at the top of the path which leads down to the 1872 chapel. In those days, Independents were what we now call Congregationalists. But when I put the question to a Congregational historian, he looked in Surman’s Index produced by the Dr Williams’s Centre for Dissenting Studies, a biographical card index of about 32,000 Congregational ministers, and in the 1871 Baptist Handbook, and could find no reference to Quick’s Green for either denomination. Does the 1845 map merely pinpoint Ann Street’s cottage meetings? Or was there really an otherwise unrecorded Congregational meeting house as well as the Primitive Methodist one? Or did the cartographer wrongly write “Independant” when he meant the Primitive chapel? But if the last possibility is the answer, then it is not on the same site as the 1872 chapel in my photograph.

The answer to all this might lie in the deeds of the 1872 chapel – if all three chapels were in fact built on the same site.

Be all that as it may, the chapel is closely associated with a number of well-known and widely influential Primitive Methodist figures. John Ride has become known as “the apostle of Berkshire”. And he and Edward Bishop were imprisoned for twelve days at Winchester for their open-air evangelism at Micheldever in 1834. John Petty, minister and historian, was invited to preach on Good Friday morning, 1851. And in a quiet corner of what is now the garden of the present house, the mortal part of Isaac Septimus Nullis lies buried until that day when “the trumpet will sound, and the dead in Christ will be raised imperishable”. The long inscription on his gravestone begins:

In Memory of Isaac Septimus Nullis who was born at Ashampstead October 9th 1828. He was born of again of the Spirit March 31, 1850. And passed from earth to a life beyond immortal life April 8th 1868.