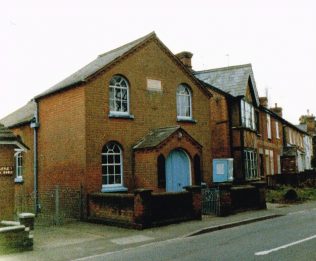 In 2014 Winkfield Row Methodist church celebrated its 160th Anniversary. Founded in 1854 it has proclaimed its faith ever since.

The Primitive Methodist magazine for December 1854 contains an account by DM of the opening of Winkfield Primitive Methodist chapel.  J Hunt of High Wycombe laid the foundation stone  on May 30th 1854 with a sermon preached by Mr Mules, and the chapel was opened for worship on September 17th 1854.  Sermons were preached by E Bishop and N Broadway; there was “a large and excellent tea.”

We are told that the society had previously met in a farmhouse owned by Mrs R Osman.