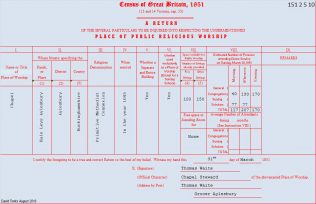 “Aylesbury In this town our people worshipped in a small cottage in the outskirts of the town for near two years.  Our prospects at that time were dark and discouraging.  But mighty prayer to God has been the instrumental cause of bringing about a better state of things.  A chapel called the Ebenezer, formerly occupied by an Independent minister, becoming vacant, (low and poor as the society was,) we ventured to take it, and fit it up.  God approved of the undertaking.  The first sermons were blest to the conversion of a man who is now a member of society.

transcribed from the Primitive Methodist magazine by David Tonks

The return was completed by Thomas Waite the steward.

The 1877-1879 1:2,500 Ordnance Survey map shows a Methodist chapel (which sort of Methodist unspecified) on Hale Street.  By 1899 it has disappeared and a chapel is marked in New Street, opposite the former Royal Bucks Hospital (SP817141). It existed until the 1960s, when it was demolished due to road widening.

Confusingly, there are two accounts of new chapels in Aylesbury in Primitive Methodist magazines from the 1880’s.  The building of the new chapel is recorded in the 1882 Primitive Methodist magazine. They built because the old one did not meet their needs. The new one was expected to cost around £600 of which they had already raised half. The 1883 magazine reports on its opening, describing it as a very neat and comfortable little chapel.  The previous one is described as “a small, inconvenient building in an out of the way, dirty neighbourhood.” Membership was small but they now had “a better prospect”

However, the 1889 Primitive Methodist magazine reports that the memorial stones for a new chapel in Aylesbury were laid on August 5th 1889. It was expected to open the new building in early 1890 and for it to be free of debt.