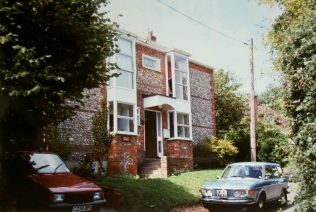 Beacons Bottom according to Wikipedia was one of the principal sites of High Wycombe’s 19th Century chair-making industry, known locally as bodging.  Beacons Bottom Primitive Methodist chapel was opened in 1866.

Just two years later Jackson’s Oxford Journal, Saturday, March 14, 1868 records that Frederick Green, of Stokenchurch, farmer, was charged by Frederick Ing, of Beacon’s Bottom, with riotous, violent, and indecent behaviour in the Primitive Methodist Chapel, at Beacon’s Bottom, on the 24th of February.  He paid a fine of one pound fifteen shillings with costs of one pound five shillings. I wonder what the story behind that is.

The chapel closed in 1970 and has been converted into a house called, as they all are, ‘The Old Chapel’.