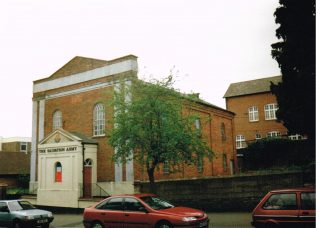 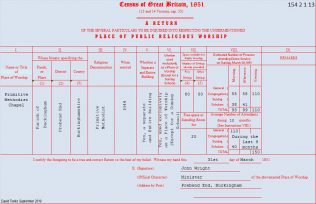 The chapel building in Keith Guyler’s picture was opened in 1842 for a group of Baptists. In time it became a Primitive Methodist chapel (shown on the 1898 Ordnance Survey map) and in due course a Salvation Army citadel (1921 map). Google Street View in May 2011 shows it still used by the Salvation Army.

When the Return from Buckingham Primitive Methodist society in the 1851 Census of Places of Public Religious Worship was completed by John Wright, the minister, the society was based in Prebend End, a mile away from the Chapel shown in the picture – see Ed Grimsdale’s comment below.

It had taken the society quite a while to find a home for themselves in Prebend End: previously they had met in a temperance hall in Buckingham but they could not afford it and had to leave and met in a cottage.  In the end they bought a plot of  five cottages and 900 sq feet of land for £105. This provided enough land for a  18′ x 21′ chapel and a burial ground.

The 1887 Primitive Methodist magazine tells us that “on the Buckingham mission the building of a small school-chapel has been commenced. A place for worship and work for our small and struggling cause in the little country town is much needed., and a suitable site having been secured, this want is going to be to some extent supplied”

How does that relate to the Moreton Road chapel?