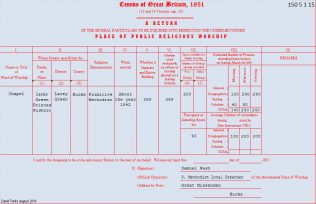 There is a very detailed account of the story of Primitive Methodism in Lacey Green together with a number of photographs on the Lacey Green and Loosley Row village website on the Methodist history page.

The Census of Places of Public Religious Worship of 1851 records Primitive Methodists in Lacey Green meeting in a chapel built about 1842.

“For many years our people at Lacey-green in the High Wycombe Circuit have been much inconvenienced, and their progress retarded, for the want of a larger sanctuary. They, therefore, thought a new chapel a desideratum, and began to subscribe towards it, when my predecessor, Mr. Jackson, travelled in this circuit ; and although many of them are poor, they nobly persevered until £40 were raised. Then we sought for a spot of land, and after experiencing some repulses and other annoyances, we succeeded in obtaining a suitable piece of freehold, and have erected thereon a neat, commodious, substantial brick chapel. It is well ventilated ; has four sash windows ; is 33 feet by 23 feet inside, and 18 feet to the ceiling. It has a good deal floor, and a neat stone over the doorway, on which is inscribed “Primitive Methodist Chapel, 1855.” The land, building, deed, enrolment, &c, will cost £175 and we have already obtained upwards of £70 towards it.

It was opened for Divine worship on Lord’s day, September 23rd, 1855, by Mr. E. Bishop, of the London first circuit, and (James Mules). The day was very beautiful ; the chapel was densely crowded, and scores could not gain admittance. Mr. Bishop’s original, powerful, and earnest discourses were calculated to do much good. On Monday, the 24th, we held a public tea- meeting. Near 300 persons were present, and enjoyed themselves exceedingly. After the tables were removed, J. Hunt, Esq., was voted to the chair ; and appropriate addresses were afterwards delivered by Messrs. Lacey, Bishop, Blackmore, Adcock, and Mules. On Sunday and Monday we collected upwards of £20. We desire to express our warmest thanks to the gentlemen and farmers who have lent their horses or teams to draw all the materials gratuitously ; and to subscribers, far and near”.  James Mules.”

The final service, held on Sunday 30th September 2001, took the form of Harvest Thanksgiving, conducted by the Superintendent of the High Wycombe Circuit, Rev Michael Hughes and the Minister of Lacey Green, Revd. Nicholas Young. The congregation numbered one hundred and ten. The closing hymn was Now thank we all our God.

Thus, was brought to a close one hundred and seventy one years of Methodist witness in the village.