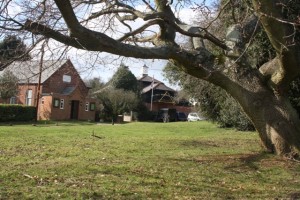 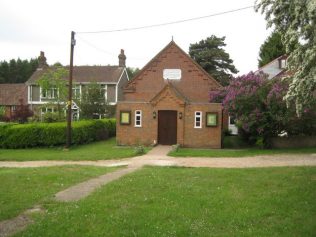 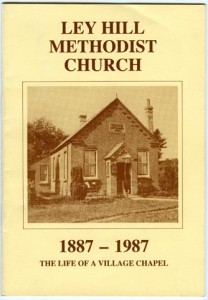 Ley Hill is a Chiltern village on the border of Buckinghamshire and Hertfordshire in the parish of Latimer, near the town of Chesham. Primitive Methodism arrived in the village in 1841, probably brought from the west, by way of Aylesbury or High Wycombe, by missionaries from the Brinkworth or Shefford Circuits, who were very active elsewhere in Buckinghamshire and Hertfordshire. In February 1841 the house of Joseph Scott on Ley Hill Common was registered as a nonconformist meeting house by the Reverend Thomas Green, who was a Primitive Methodist Minister. The 1841 census reveals that Joseph Scott was a brickmaker (then aged 50) living with his wife, Ann, and their son and two daughters. He may well have worked at “Cowcroft Brickkiln” shown on the Ordnance Survey map just a few hundred yards to the west of Ley Hill.

For the next five years the society met in various cottages near the common until, in 1846, two cottages in the yard at the rear of the Crown public house were converted into a chapel.

Christenings at Ley Hill first appear in the St Albans PM circuit registers in 1847, although they can also be found in the High Wycombe PM circuit records in the 1850s and 1860s. In 1870 the Berkhamsted PM Circuit was formed, consisting of the societies at Berkhamsted , Crouchfield (Boxmoor) , Hemel Hempstead , Tring and Ley Hill.

Eventually, in 1887, the current chapel was built on a site adjacent to the village green, slightly to the north of the Baptist chapel, on freehold land given by Lord Chesham. It cost £226 10s and was built with money borrowed from Mr Jesse Ausden. In the 1881 census, Jesse Ausden (aged 37) was living at Winkwell, a hamlet near Bourne End between Berkhamsted and Boxmoor, with his wife, Ann, and their six children. His occupation is recorded as “master blacksmith and Methodist local preacher”.

A porch was constructed in 1897 and a room at the rear of the building was added in 1907. The chapel has been registered for weddings since 1891. In 1908 the Baptists, who had been present in the village since 1786, decided to combine with the Primitive Methodists. Records held by the Hertfordshire Archives and Local Studies indicate that the trusteeship of the property was moved from Mr Jesse Ausden in 1914, when his original loan was finally paid off. The 1911 census shows that Jesse and Ann Ausden were still living at Bourne End; he gave his occupation as “small holder” whilst his wife was described as a “cow keeper”.

Following the Union of 1932 the chapel continued to serve as the local Methodist church. Further alterations to the building were made in 1976, and in 1982 the inside of the chapel was modernised with the inclusion of toilets and a kitchen. Today, Ley Hill Methodist Church (now part of the West Hertfordshire and Borders Circuit) is an active evangelical society with many young people.