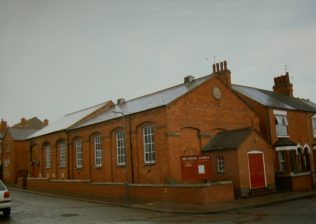 In the photograph in 1998 it appears to be still in use.   In May 2015 it is Milton Keynes Tabernacle church.

There is further information on life in the villages on the Milton Keynes Heritage Association website.  I particularly liked the account of the Rev Allan Guest who became vicar in 1908.  One of his first acts was to tell his congregation that the church had not been properly registered which meant that all marriages held there were void and all resulting children illegitimate.  Not a good start.

It gets better because in due course he was fined £3 for assault by beating a 14-year-old Primitive Methodist girl.

Seeing her standing with some friends, the vicar asked why she did not attend church.  Her reply was that as a Primitive Methodist she could not attend, at which point the vicar stormed: “There is only one church in England, and that is my church,” and slapped her cheek. When he later tried to apologise, the girl’s mother slammed the door in his face.

It would never happen to  Primitive Methodist minister … …