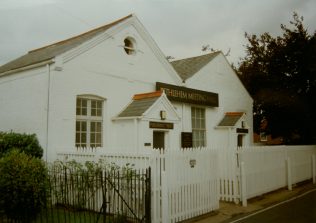 Tylers Green Primitive Methodist chapel, known as Rehoboth and the Ranters chapel, was built by in 1843 and was replaced by the new Penn and Tylers Green Methodist church in 1968.

The building has two white painted gables, the earlier brick & flint on the right and a similar sized brick extension (c.1920) to the left.  They have shallow slate roofs.

After closure, at the time of Keith Guyler’s photograph in 1996 and on Google Street View in August 2010 it became the Bethlehem Meeting Hall, part of the John Metcalfe Publishing Trust.