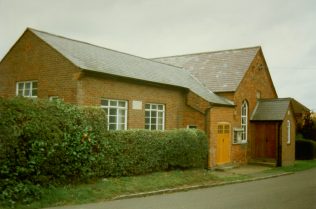 After the stone was laid, “the people retired to a booth in Mr. Woodbridge’s orchard, where upwards of 350 took tea.”

There is a good account of the development on non-conformist Christianity in the Chiltern Commons in the essay Dissension to Domesticity by Andrew Muir in Our Common heritage, published by the Chilterns area of Natural Beauty.