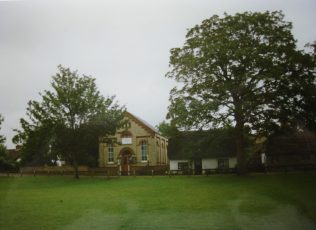 Brampton is south west of Huntingdon.  The notes with Keith Guyler’s picture tell us that Brampton Primitive Methodist chapel opened in 1889.

However, in the Primitive Methodist magazine for 1880, under Connexional Affairs it tells us that a new chapel had just been opened in Brampton (more likely to be the Cumbrian one) – since when Magistrates have been less busy and less liquor has been sold.

The 1889 date is supported by a report in the Primitive Methodist magazine for 1889 which says that the memorial stones for “a neat little chapel” were laid on Easter Monday, 22/04/1889.