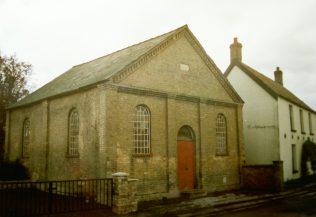 Burwell is north west of Newmarket.  In the notes with his photograph, Keith Guyler says that Burwell Primitive Methodist chapel was opened in 1860.

The Victoria County History of Cambridgeshire says that in 1836 the Primitive Methodists had established  a chapel on North Street, rebuilt or refronted in 1864, usually part of the Soham circuit, except when worked from Ely, 1857-85. They were holding camp meetings nearby in 1863. The two Methodist congregations united in 1939 at the Wesleyan chapel; the ex Primitive Methodist building was sold for industrial use in 1940 although Keith Guyler dates this as the 1950s.

At the time of his photograph in 1996 it was disused and his notes say it was a house by 1997.  However, on Google Street View on 5 photographs dated between 2008 and 2011 it still appears disused and little changed from 1996 except for the windows on the front and right hand side being blocked up and a new front door with light.