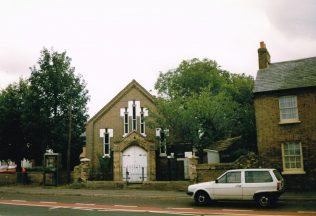 Early meetings of the Society took place in a baker’s shop and then various cottages whilst attempts were made to buy a piece of land suitable for Chapel.  In 1865 a Sunday school was started with Mr Wells as a superintendent.  With a day of great celebration the foundation stone was laid for the chapel on 28 October 1870.  The opening services lasted over three Sundays beginning on 19 March 1871.  The two main ministers involved in the building of Eaton Ford were Oliver Jackson and Brownley Westbrook, who preached on the morning and evening of the first Sunday. JS Wyard also preached.

The Chapel was extended with the purchase of extra land in 1893.  In 1983 major renovation work took place with the removal of the pews and pulpit and moving the organ.