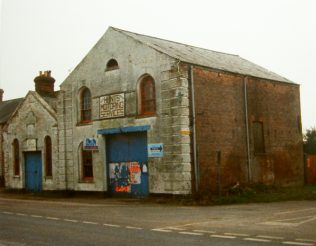 Elm is south east of Wisbech.

There is an account by Edmund Butters and Michael Taylor of the opening of the Primitive Methodist chapel in what was called Elam in the 1836 Primitive Methodist magazine. Elam was first missioned around 1825. The new society moved from house to house until a small chapel was opened north of the main village on February 26th and March 1st 1835 by G Tetley, S Atterby and the Rev  I Jarrom, Tutor General of the Baptist Academy.  The chapel was in the Wisbeach circuit.

The chapel was later enlarged as the society continued to grow and the Sunday school reached 130. In the 1856 Primitive Methodist magazine, James Seager tells us that in 1855 a larger chapel was erected, 37 ft. by 27 ft. 9in. without, and 19ft. from the floor to the ceiling. It had a front gallery, four circular-headed windows, two windows in the sides, and two in the pulpit end ; gauged arches and rustic quoins, slated roof, boarded floor, and walls 14 in. thick. It accommodated 300.

On July 25th, 1855, the foundation stone was laid and Mr. J. G. Wright preached, soon before he went to the Burra Burra mines mission in South Australia. The opening services commenced on Thursday, October 25th 1855. Opening sermons were preached by Mr. R. Key, Mr. W. Wainwright, and a public tea was provided on the following Monday. The entire cost of erection was £220.; and a debt of £30 was still owed on the old chapel.

Elam Primitive Methodist chapel was the fourth new chapel opened in the Wisbech circuit within twelve months “and all are doing well”.

Keith Guyler’s 1994 picture shows the two Nineteenth Century chapels side by side, in commercial use. The larger chapel on the right was the 1855 one.  On Google Street View in 2009 the buildings are little changed although by then disused, but between 2012 and 2016 the larger chapel has been largely demolished. A bungalow has replaced the 1924 chapel.  The pictures on Street View matching the descriptions in the Primitive Methodist magazine  and the similarity of dates from the Victoria County History confirm that Elm and Elam are the same place.