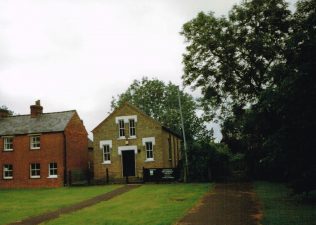 The Victoria County History of Cambridgeshire tells us that in 1825 the curate said that there were four families of Independents or Baptists and that a licensed room was occasionally used by a preacher from the Primitive Methodists.  A Primitive Methodist chapel was built facing the Green in 1846 and registered in 1856. In 1851 it had congregations of 40 in the afternoon and 43 in the evening.  It was rebuilt in brick in 1879.

However, there is a bit of unscrambling needed. The Primitive Methodist magazine for January 1857 contains an account by William Cooper which gives an alternative version of the opening of Eltisley Primitive Methodist chapel.  It says that the small village of Eltisley was first missioned in the mid 1840s.  A chapel was bought in 1848, but it was ” a temporary mud building” so was costly to repair and in the end unsafe to use, so a new chapel was needed.

In 1873 the Methodists were said to attract many people away from the parish church ‘through curiosity’. In the mid 20th century, services were held in the Wesleyan and Primitive chapels on alternate Sundays until the Wesleyan chapel was sold in 1964.  The Primitive Methodists’ chapel remained in use.

The Eltisley Historical Society reports that the Prims used to hold Camp Meetings, with music by the Salvation Army, at the start of feast week.

The chapel, on the Green, is still marked as the Methodist church on the 1:2,500 Ordnance Survey map of 1973. On Google Street View by 2008 it has been converted into a house.