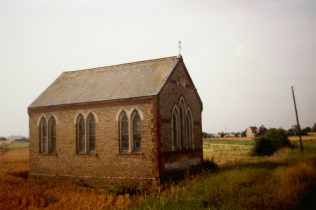 Harold Bridge is Gorefield which itself is west of Wisbech. Harold Bridge Primitive Methodist chapel in Keith Guyler’s picture dates from 1908. It is another of those chapels that appears to be completely isolated and you wonder where the congregation would have come from.

It served until the 1950s and at the time of Keith Guyler’s photograph it was in use as a corn store. It has since beem converted into a house.

In the 1855 Primitive Methodist magazine James Seager writes about the opening of Harold Bridge Primitive Methodist chapel. Harold Bridge had been missioned by a colporteur around 1844, before which “the inhabitants, not having any place of religious worship within two or three miles, gave themselves up to work wickedness, lived in the habitual profanation of the Sabbath, and were awfully ignorant of the plan of salvation.”

The foundations stone of the new chapel was laid on July 24th, 1855, when addresses were delivered Messrs. J. G. Wright, G.Betts, and G. Flint. From August 26th, celebratory sermons were preached by brothers Batterham and Deans, and after a tea-meeting Messrs. J. Seager, J. Bunn and M. Taylor.

The chapel “will accommodate upwards of sixty persons, at a cost of £49/10 towards which we have raised, by subscriptions and the opening collections, £19. It has a boarded floor, is covered in with slate, and is legally conveyed to the Connexion.”