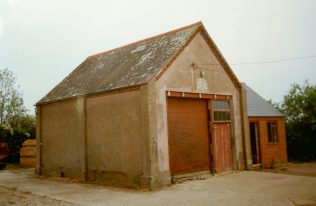 Kirtling Primitive Methodist chapel was opened in 1870 and served for over 100 years, holding its last service in 1975.  It accommodated 80 worshippers.

At the time of Keith Guyler’s photograph in 1987 it served as a store.  Google Street View has only found it once, in 2008, largely because it is at the end of a narrow, winding no through road.  It has however by this time been converted into a very small but neat bungalow with what appears to be the larger part of the L shape building retaining its roll-over door, perhaps as a garage.  It has lost its surrounding hedges and is waiting for landscaping; what is it like now?

Given how isolated the chapel is, you appreciate how different the way of life was when the chapel was established, compared to how it is now.