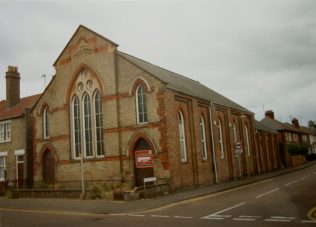 March Station Road Primitive Methodist chapel dates from 1899 and served until 1988.  By the time of Keith Guyler’s photograph in 1995 it was for sale.

On Google Street View in 2009 it has been demolished and replaced by a detached house.

More of the story is told in the Primitive Methodist magazine of December 1900 which presents it as a case study of how the Connexion could grow in areas with a rapidly expanding population. The previous chapel which was poorly located was sold off some 15 years previously as the society had declined and the members advised to find another church. However, less than three years previously the Wisbech society evangelised in March and held meetings in the Temperance Hall.  As the new society thrived, a new chapel was built at a cost of £1,500 of which they had raised half.