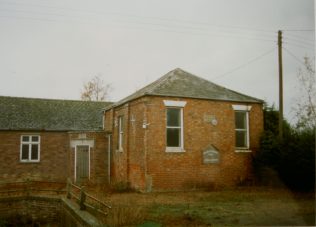 Marshland Fen Primitive Methodist chapel dates from 1855. A hall was added in 1957.

Although it was still active on Google Street View in 2009 it has since closed.

In the 1855 Primitive Methodist magazine there is an account by Thomas Swindill of the opening of the chapel.

“Marshland Fen is composed of marshes and fens in the parish of Walpole St. Peter, one of the seventeen parishes in which Marshland, in the western extremity of the county of Norfolk, is divided. Between thirty and forty years ago, the land had the wild and sterile appearance of a desert. Very little of it had been put under cultivation, and the moral condition of the inhabitants was no better; “gross darkness covered” their minds. None feared God or regarded man. The Sabbath was totally neglected ; man and beast might often be seen working as on other days. No place existed in which to perform the public worship of Jehovah, nor did any minister lift up his voice to show the people their sins. This dark and cheerless state of things continued, without any special improvement being effected, until about 1832, when the feet of our devoted missionaries were directed to the place

Of those heralds of the cross, Mr. James Garner, of sacred memory to hundreds in this district, led the way. He and his coadjutors were cordially received by the people whose good they sought to promote, and their word was accompanied with signs more encouraging than human patronage. For two years they preached in Mr. Collins’s dwelling house, when, persuaded of the orthodoxy of their doctrines, the purity of their morality, and the adaptation of their ministry to the necessities of his ungodly neighbours, he prepared at his own expense a small place for their exclusive use. The place was adjoining an outbuilding in his farm yard ; but neither the obscurity of its situation, nor the humbleness of its accommodation, hindered the operation of the word preached. Within the precincts of that old ” lean-to,” God deigned to dwell with men, and vouchsafed many revelations of his power to save sinners. The first day’s services resulted in the conviction and regeneration of Mr. Thomas Taylor, in whom the cause has had a valuable friend in many important respects. His conversion was followed by that of others, and a church was formed, against whose varied interests adverse influences have not been able to prevail. At that time the inhabitants were few and far between; but as the barren land, under the hand of skill and industry, became a fertile region, the population so increased that a larger and more commodious place of worship was required.

Encouraged by the promise of several liberal donations, the little society “had a mind to” build a house for God ; but land could not be obtained for the purpose. In this gloomy way things went on year after year until the erecting of a chapel became a kind of standing doubt. However, in January last, a series of revival services were held, and amongst the hearers one evening was Mrs. Neep. On her return home she informed Mr. Neep of the dilapidation and incommodiousness of the place in which we worshipped, and how she sympathised with us in our inability to better our situation. Mr. Neep pondered the remarks in his heart, and the next day he offered to give a site of land and £10. to the society. But there never was a good deed done without somebody finding fault with it. This beneficent act was condemned. We shall not condescend to particularise, but leave it to the judgment of Him by whom ” actions are weighed.” Mr. Neep had counted the cost, and he was not to be moved from his generous purpose ; and on July the 29th, 1855, a chapel capable of accommodating 120 persons was opened.

The novelty of the occasion attracted so large a concourse, that the services were conducted in a spacious barn, kindly lent by the afore-named gentleman. The officiating minister was Mr. R. Key, whose impressive and energetic discourses were listened to with deep attention. To many present the rustic building was ” the gate of heaven.” On the following day 190 individuals partook of tea. The provisions were of excellent quality, and everything was arranged in such a manner as secured the comfort of all present. In the evening there was a public meeting, when several appropriate and animating addresses were delivered, and the financial state of the building fund reported, from which it appeared  £81/14/4¼ had been raised

Honour to the voluntary principle. It has erected a connexional chapel which is an ornament to the Fen, and the opening services of which have been attended with a degree of excitement, influence, and liberality without a parallel in the recollection of the oldest resident in the neighbourhood. Thanks are hereby presented to Mr. Neep for the gift of the land, a donation of £101 and a splendid cushion for the pulpit, besides £12. 12s. 2d. collected by cards ; to Mr. and Mrs. Collins and family for donations amounting to £17, and £4/15/0. collected by cards, and also for having accommodated the preaching services for twenty-two years without one farthing of responsibility to the society ; to Mr. Thomas Taylor, for a donation of £10; and to all others who have in any way assisted in the laudable undertaking. The circumstances of the chapel are so easy that the ordinary income will enable the trustees to liquidate the debt annually. May the day soon arrive when the whole earth shall be converted into one temple sacred to the God and Father of our Lord Jesus Christ. Thomas Swindill.”