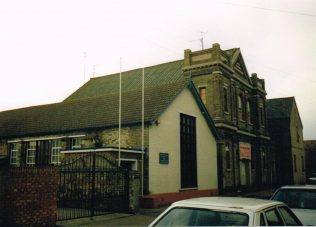 There was a Primitive Methodist society in Peterborough in the early 1830’s and a Circuit established in 1839.  This was based on the church in New Road (built 1862, closed 1953).  In 1888 a second Circuit was established, centred on the chapel in Cobden Street which had been opened in 1871. It accommodated 650 people and was built on a site presented by Mr. I. Edis.

It had a brass band which came third in the Peterborough contest held on the 25th September 1897 conducted by F Richardson.

The chapel closed in 1965.  Keith Guyler notes that the Sunday School became the Ukrainian Church, whilst the chapel was a disused store.

On Google Street View in 2016, the chapel has been demolished and there is now a mosque on the site.  The Sunday School is now Kinder Care Nursery school.