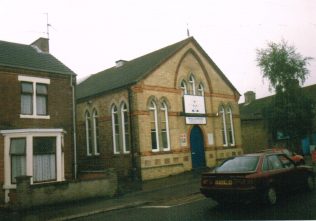 The Primitive Methodist chapel on Midland Road Peterborough was opened in 1898.

It closed in the 1970s and Keith Guyler notes that it subsequently became Westown then Elim Church.  At the time of the photograph in 1999 it was the Wellsprings Community Church (Elim Pentecostal). On Google Street View in 2014 it is shown as being the the Grace Centre of the City Elim church.