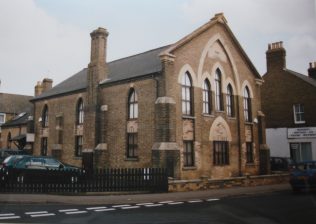 After closure in the 1940’s, the chapel was used to store furniture  and at the time of the photograph was offices for an insurance company.  See John Kiddle’s comment below for more detail.

In Google Street View in September 2014 it is still in the same use.