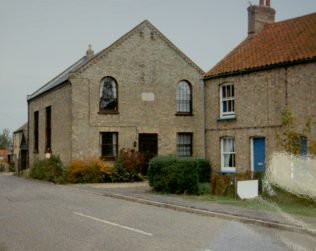 Wicken is north west of Newmarket and Wicken Primitive Methodist chapel was near the junction of North Street and Gilbert’s, later Chapel, Lane.

Primitive Methodists lwere active at Wicken from the 1820s, using a thatched cottage and then a barn off North Street. A small timber-framed chapel was built around 1835 with seating for 185. In the 1851 religious census three Sunday services were held with 120 attending in the morning and 190 in the evening.

Following the purchase of an adjacent plot of land (Mrs Houghton lent the money), the chapel was rebuilt in grey brick, with a schoolroom behind. The foundation stone was laid by John Cullen on May 14th 1866 and the new chapel opened on July 27th 1866. Speakers at the services and celebratory tea included Rev W Wainright, Rev J Phillips (London) and Rev G Seaman (Eastg Dereham).  Improtant donors  included Mrs Houghton, Mr Marshall and all the ladies who provided the teas.

The Victoria County History of Cambridgeshire reports a slight distrust between the Methodist and the village Anglicans that lasted even into the mid twentieth century.