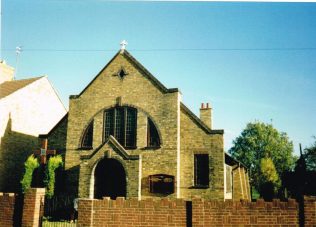 An “iron” Primitive Methodist chapel is recorded by the 1898 edition of Kelly’s Directory.  Keith Guyler’s notes record it as closing in the 1960s.  At the time of his photograph and Google Street View for 2014 it was Ukrainian Catholic Church of St Olga.  It accommodated 200.