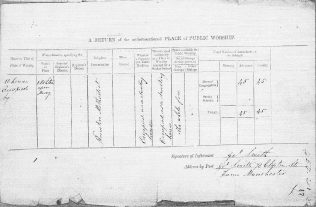 zoom
Ashton upon Mersey; Return from the Primitive Methodist preaching place in the 1851 Census of Places of Public Religious Worship
provided by David Tonks

The 1851 Census of Places of Public Religious Worship tells of a preaching place in  a dwelling house in Ashton-upon -Mersey.  Mr Smith who completed the return tells us that the  attendance in both afternoon and evening was 45 people.

The Primitive Methodist magazine for September 1852 contains an account of the laying of the foundation stone at Ashton-upon-Mersey Primitive Methodist chapel. Unlike most of these accounts in the magazine, this one was taken from a newspaper report in the Manchester Examiner and Times rather than being written by a local correspondent.

The ceremony took place on 14th August 1852 and the service was led by the Rev G Stansfield, with the choir conducted by Benjamin Broadmeadow. The sermon was preached by Rev Cheetham of Warrington. The stone was laid by George Hollis using a silver trowel given to him by Mr Rhodes,the builder.

“Presented to George Hollis, Esq., by a few Christian friends of Upper Moss-lane Chapel, Hulme, Manchester. at the laying of the foundation stone of the Primitive Methodist chapel, at Ashton-upon-Mersey. July 14th, 1852.”

The service was completed by Rev Mould.

Afterwards everyone went to the nearby Wesleyan chapel for tea and more addresses, including two by Wesleyan ministers Rev Booth and Rev Goodison.

What happened to the chapel? On Google Street View in 2016 the street is now mainly older people’s housing but one building could be the chapel. Can anyone clarify?