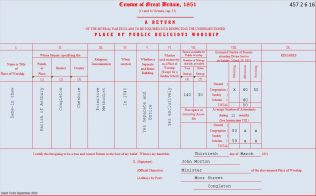 zoom
Dane in Shaw: Return from the Primitive Methodist chapel in the 1851 Census of Places of Public Religious Worship
transcribed by David Tonks

Daneinshaw (now more commonly Dane-in-Shaw) Primitive Methodist chapel in the Congleton circuit was opened on December 27th 1840. There is an account in the Primitive Methodist magazine by W Chubb of the occasion, transcribed here and in the attached document:

“Daneinshaw Chapel.—The P. Methodist ministers, in accomplishing their delightful object of benefiting mankind, visited Daneinshaw about the year 1820; and the Head of the church crowned their labours with encouraging success.  For many years we here worshipped the God of our fathers in a house.  But this, for some time, had been far too small to contain the congregation, or even to accommodate the increasing society.  Many unsuccessful attempts were made to procure a piece of ground; but at length, by the Divine blessing on the prayers of the people, we obtained a piece of land.  Proper arrangements were made, and the building was commenced in October. 1840.  And on Sunday, Dec. 27, 1840, the chapel was opened for religious worship, by Bro. John Hallam, from Bemersley; and on Sunday, January 3, 1841, by Bro. John Graham, from Tunstall.  The congregations were encouraging, the influence delightful, and the collections surpassed our expectations.

This chapel is thirty feet long, twenty wide, and sixteen high from the floor to the ceiling.  It has four sash windows, and a fanlight over the door.  Its situation is eligible, and its circumstances are easy.  It is Connexional, and has a flourishing Sunday school.

Our grateful acknowledgements are due to many friends, who variously contributed to the erection of both these chapels; and we trust they will hereafter receive a full reward”

Where was this chapel and what happened to it?  We know it was still active ten years after its opening from the 1851 Census.   There was a chapel marked on Ordnance Survey 6″ plan of 1899 at GR SJ883616 in Mill Lane, but that was Wesleyan; that building still exists on StreetView.