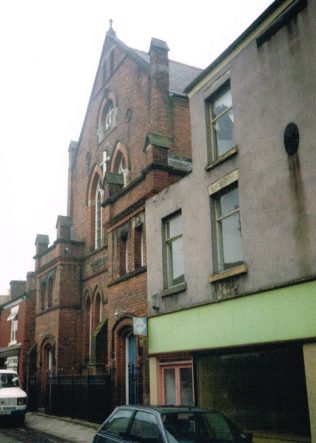 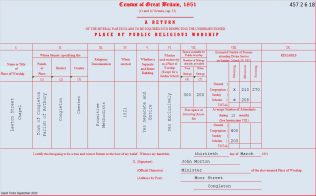 zoom
Congleton: Return from the Primitive Methodist chapel in the 1851 Census of Places of Public Religious Worship
transcribed by David Tonks

The Primitive Methodist chapel was built on Lawton Street in 1821 and wasn’t on Kinsey Street until its expansion. Hugh Bourne was reported as attending the chapel and following his visit membership increased by 150 members who caused the creation of Congleton’s own circuit. The chapel joined the Congleton circuit between 23rd of December 1838 and 1st January 1839 before transferring to the Biddulph and Mow Cop circuit.

This original chapel was rebuilt in 1890 which led to its frontage being on Kinsey Street. The architect was Mr. A. Tomkinson of Wolstanton who died during the project and never saw it completed. The memorial stones were laid in the new chapel on the 9th July, 1890 and was announced open. In 1893, the chapel was recorded as sitting 500 members as well as 250 lettable seats and 250 free seats for visitors. It also had an onsite pipe organ.

In 1990, the chapel was still reported as being open to service with organised coffee drop-ins, rallies on Sunday evenings and a Youth Fellowship group. However, Kinsey Street Methodist Chapel was a very large statement building which was too expensive to maintain and by 1991 became an unused building that was left empty.