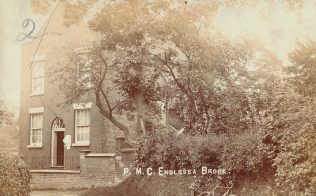 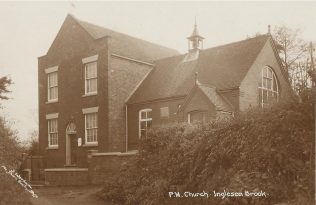 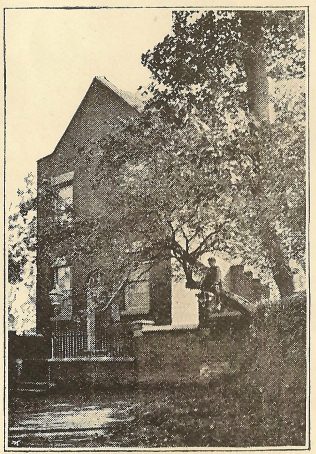 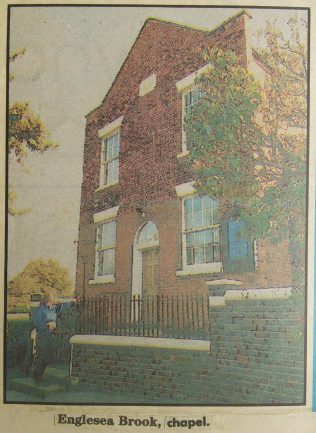 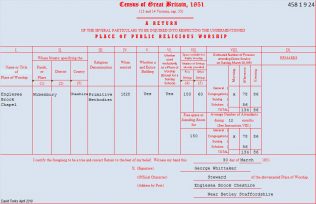 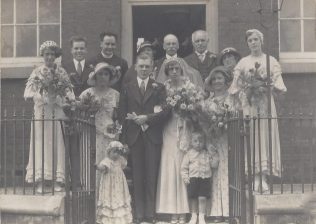 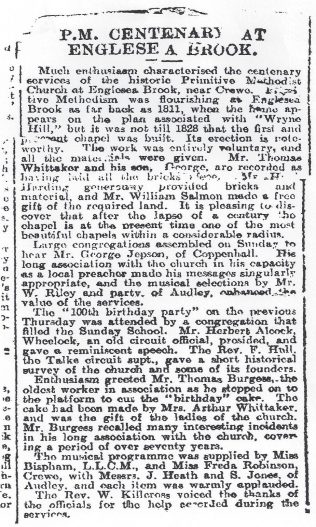 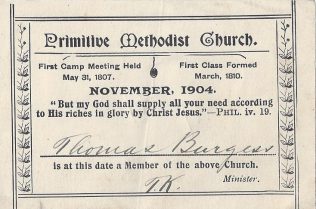 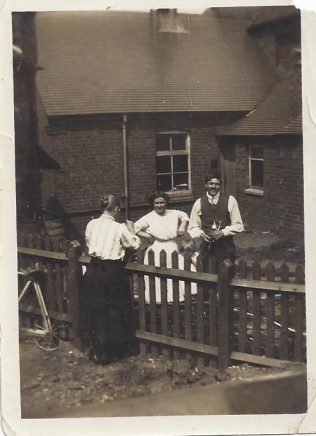 zoom
An unusual view of the back of the School room, soon after it was built in 1914. The people in the photo may be the caretakers who lived in the Chapel Cottage next door. This would be the side of the fence in the foreground.

According to a local newspaper cutting from 1928, ‘Primitive Methodism was flourishing at Englesea Brook as far back as 1811, when the name appears on the plan associated with ‘Wryne Hill’.’

Englesea Brook Primitive Methodist chapel was built in 1828, entirely by volunteers, and all the materials were given by local people.

In 1907 W J Harper, in Mow Cop and its Slopes, described Englesea Brook as ‘a quiet old world spot, about three or four miles from the busy town of Crewe, and very little different to what it has been for a hundred years or more. Away from the bustling noise and hurry-scurry of the town it goes on its quiet way, heedless of the progress and developments that have been made not far from its secluded position.’

‘Before Crewe was thought of, the early Methodist preacher plodded along its lonely lanes to preach in the little chapel, pushed into a corner, behind stables and yards, which still serves the little community as the only place of worship in the quiet village.’

‘The Chapel is exceptionally neat and well furnished inside…  Latterly the trustees have bought a piece of land, opposite the Cemetery and next to the Chapel, on which they hope some day to erect Memorial Schools to Hugh Bourne, who still has descendants in the locality’.

It took several years to raise the funds, but the School Room was finally opened in 1914. Many local people remember going to Sunday School here. George Burgess and Samuel Astbury were two of the Sunday School Superintendents. The highlight of the year was the Sunday School Anniversary, when a stage was erected at the front of the chapel.

At the time of its centenary in 1928, the chapel was considered to be ‘one of the most beautiful chapels within a considerable radius.’  ‘Much enthusiasm characterised the centenary services of the historic Primitive Methodist Church at Englesea Brook, near Crewe’.

The preacher on the Sunday was Mr George Jepson of Coppenhall, a local preacher with a long association with Englesea Brook. Large congregations gathered to hear him. Music was provided by Mr W Riley and party from Audley.

The previous Thursday, a 100th birthday party was attended by a congregation that filled the Sunday School room. Mr Herbert Alcock of Wheelock, presided, and gave a ‘reminiscent speech’. Englesea Brook was then in the Talke circuit, and the superintendent, Rev F Hull, spoke about the church’s history and some of its founders.

Music was provided by Miss Bispham and Miss Freda Robinson, of Crewe, with Mr J Heath and Mr S Jones of Audley. The vote of thanks to all the helpers was given by Rev W Killcross.

The cutting of the cake was performed by the oldest member, Mr Thomas Burgess. The cake had been made by Mrs Arthur Whittaker, and given by the ladies of the church. Mr Burgess recalled some of the interesting incidents that had happened during his time at Englesea Brook Chapel, which spanned more than 70 years.

These items are among a collection kindly donated to the museum by Roy P Rushton, on behalf of the Burgess family.