The Chapel on the Hill 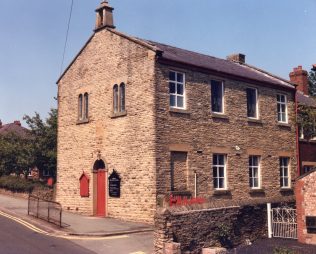 The Primitive Methodists first gained a foothold in the little village of Greave Fold in 1851, when it first appeared in the Stockport preaching plan and a Sabbath School was commenced.

The society grew and a stone Chapel was built in 1861 at a cost of £412 9s 7 1/2d on a plot of land on the main road up from Romiley. The worship area was on the upper floor up a steep flight of stairs. In 1868 the attic was altered to allow for teaching and in 1871 an infant vestry was built. The Eden Day School began on the ground floor of the chapel and in 1880 was accepted by the Education Department as an efficient and certified establishment, meaning that it received all the grants and privileges afforded to all government schools. The rates payable were Infant 1d per week, Standards I and II 2d per week, and Standard III and above 3d per week.

In 1890 the Upper Room of the Chapel was completely remodelled at a cost of £120, giving increased accommodation. Electric lighting arrived in 1925.

There were discussions about building a new Chapel during the late 1920s and early 1930s but in the end this was changed to building an extension at the back of the original building. This was built at a cost of £1200 and consisted of a two-storey brick extension with new primary room, classrooms, kitchen, toilets, heating chamber, boiler house and heating system. The extension was opened on 4th Nov 1939.

The Chapel was not licensed to perform marriages until 1948.

Greave Methodist Church was always a small community, maintained by a group of long-serving local families such as the Gees, Bennisons and Howes, Smiths and Lamsdells, and Blakemans as well as other very loyal and devoted individuals.

The Church ceased to worship on 18th December 2005, and the building is now a private residence.