You are here: HomenextChapelsnextCheshirenextI - MnextIrby Hill Primitive Methodist chapel (i) 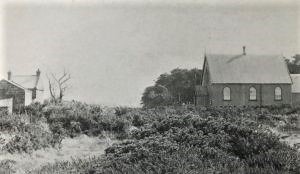 zoom
Irby Primitive Methodist chapel as it was in 1890
Provided by Christopher Wells, with permission from source. 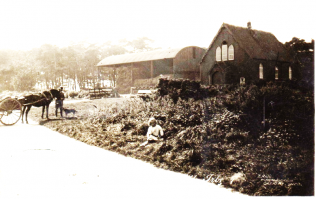 zoom
Irby Primitive Methodist chapel as it was in 1910
Irby Methodist church website, with permission. Provided by Christopher Wells 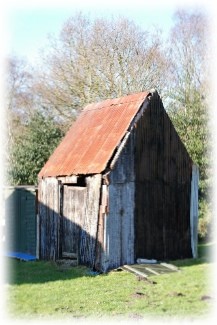 zoom
The final remains of the Irby Primitive Methodist Tin Chapel – the Vestry – before it collapsed in 2013
Irby Methodist church website, with permission. Provided by Christopher Wells 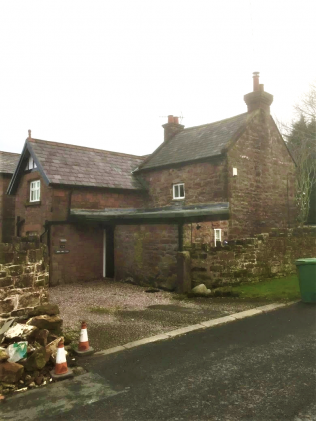 Today Irby is a rural village of about 6,000 residents lying about 5 miles south west of Birkenhead.  Its name is of Viking origin meaning ‘the farmstead of the Irishmen’.  Its population was 96 in 1801, 180 in 1851 and 146 in 1901. The nearest Anglican church to Irby in the 19th century was St Bartholomew’s, Thurstaston, about a mile’s walk to the south west.

It is likely that Irby was visited by Primitive Methodist preachers in the 1820s and 1830s.  Primitive Methodist ministers were stationed in Liverpool from 1824 when the Liverpool Circuit was established [1].  Ministers could have travelled to north Wirral on missions by crossing the Mersey using one of the steam-driven ferries that had started running from 1819.  At the same time, preachers from Chester were visiting villages in south Wirral.  However, there was still no Primitive Methodist society in Irby at the time of the 1849 Liverpool Circuit Preaching Plan mentioned in Reference 1 – the Wirral societies were Liscard, Birkenhead and Wallasey, all in the north east corner of Wirral.

The first record we have of a society in Irby is the Liverpool Circuit Preaching Plan for 1859, Q2.  At that time, the Liverpool Circuit had a Birkenhead Branch to cover north Wirral made up of eight societies: Birkenhead, Liscard, South Tranmere, Poulton, Bebington, Hoylake Open Air, Greasby and Irby.  Irby had a single service each Sunday at 6pm led by a local preacher, and a weekday service at 7.30pm on Wednesdays once every four weeks led by one of the circuit ministers.  In the absence of a chapel, these would have been ‘cottage meetings’.  The Society Steward was Thomas Brown, who was also a lay preacher.  He appears in the 1861 Census living at Irby Hill, about 1¼ miles north of Irby village; he was born in 1815 in Malpas, a farmer of 72 acres employing one labourer and one boy.  He had a wife Martha born in 1812 in Malpas, and a grown-up daughter; also living with them were a 10-year-old nephew, a carter and a house servant.  Sometime before the 1871 Census, Thomas, Martha and a grandson moved to Farndon, 7 miles south of Chester, where he ran a draper’s shop.

In about 1867, George Cooke, a farmer aged 41, his wife Harriet aged 38 and four or five of their children moved from Knutsford(?) into Irby Hill Farm on Mill Hill Road, about ¾ mile north of the centre of Irby [2].  At the time, their eldest child Emma (aged about 10) may have been living with her grandmother near Congleton and their second child Fanny (aged about 9) was probably living with her uncle and aunt, Rev Thomas Bramall and his wife Eliza (George’s sister), near Shrewsbury.  Rev Bramall was a Primitive Methodist itinerant minister; they had no children, and Fanny lived (and moved) with them from the age of 3½ until marriage.  Her husband was a PM minister, Rev. John Dudley, and she became a well-recognised minister’s wife (see Fanny Dudley).

In 1869 George and Harriet started arranging PM cottage meetings every Sunday in the kitchen of their farmhouse.  In 1880 or 1881, having failed to find suitable land elsewhere, they offered a corner of their stackyard across the road from the farm for an ‘iron chapel’ to be built; it was opened in May 1881 at a cost of £130 and became known locally, with affection, as the ‘tin chapel’.  The chapel is labelled on an 1899 map [3]; its footprint scales at 30’ x 19’ and it seated about 100.  It had two extensions: a small porch at the front and a vestry at the back.  The latter survived after the chapel was taken down until heavy snow and high winds brought it down in 2013.

Corrugated galvanised iron was developed in the 1830s and, after 1850, many types of prefabricated buildings were produced using it, including churches, chapels and mission halls [4].  Early tin churches were easily erected, but initially they were expensive at about £4 per sitting.  However, by the end of the century, prices had decreased to about £1 per sitting plus the cost of foundations, heating and lighting, which could add another £70 for a church to seat 200.  These figures are comparable with the Irby figures of £130 for a 100-seat chapel.  Source [4] lists 73 ‘tin tabernacles’ of various denominations still existing in England today (2021), some still places of worship.  Many are of somewhat functional design, having oblong windows and low roofs; none closely matches the Irby design which features gothic-shaped gable and side wall windows, a high and steeply pitched roof and decorative rake fascia.

Two years after the chapel opened, the Birkenhead News of 11 August 1883 reported on the anniversary events the previous Sunday:

‘The congregations were good, and the collections in advance of last year.  On the day following, the annual tea meeting was held, when between two and three hundred persons were present [note that the population of Irby then was fewer than 200!].  This was followed by a public meeting in the chapel ….. The choir gave several nice pieces, Miss Cooke presiding at the harmonium.  One of the speakers suggested that as there was only £20 debt on the chapel, they should sweep it off at that meeting.  The friends took the matter up with spirit and the amount was soon contributed, and now the chapel is free from debt.’

How versatile were the Cooke family!  Which of the daughters was the harmonium player?

The following year the anniversary services were also reported on, this time by the Cheshire Observer of 9 August 1884.  Rev Bramall, Harriet Cooke’s brother-in-law (see above) who was then stationed at Chester Second Circuit, preached at the morning and evening services and was one of those who gave a ‘stirring address’ at the platform meeting the next day.  ‘Congregations were good’; this time ‘Miss Maddock presided at the harmonium and the choir rendered very creditable service’.  200 people enjoyed the public tea meeting and a good collection was taken at the platform meeting.

The Birkenhead News of 13 November 1886 reported on ‘an excellent temperance lecture delivered at the Irby Hill Primitive Methodist Chapel ….. The building was crowded to excess, and the lecture was listened to throughout with much attention.’  Unfortunately, the report says little about the lecture but concentrates on congratulating Mrs Tomkinson (the lecturer) on returning to the scene of her husband’s defeat as a Liberal candidate in a recent election.

‘Mrs Tomkinson has nothing to gain from thus addressing the Wirral people; her husband has given up the candidature, and it cannot, therefore, be with a hope of wooing support that she thus goes among the electors.  The natural conclusion – and the correct one – is that her object is to benefit her fellow-beings by inducing them to lead sober and respectable lives.’

The Preaching Plan for Birkenhead Circuit of 1889 Q2 shows that the circuit then consisted of these chapels: Grange Road Birkenhead (head of circuit, built in 1869), Mount Tabor in South Tranmere, Beckwith Street in Birkenhead, Poulton, Seacombe, Irby and West Kirby.  Harriet Cooke was the Society Steward for Irby (an office she held for more than twenty years).  The pattern of services was the same as that in the 1859 Plan.  There were 15 members; however, we know from other studies that weekly attendance may have been much higher.  For instance, at the Willaston-in-Wirral 1838 chapel, membership in the 1850s and 1860s varied between 6 and 22 but attendance remained fairly constant at about 80.

The final newspaper report found about the chapel was in the Birkenhead News of 23 August 1919 when a service was held in memory of Pte. Frank Lester, V.C., who had been the chapel organist.  There was ‘a crowded congregation which listened with every mark of sympathy and respect to the story of the hero’s life and character.  A beautiful repoussé copper tablet was unveiled.’

In 1934, because of increasing numbers worshipping at the ‘tin chapel’, the society decided to purchase some land in Mill Hill Road much nearer the village centre.  The present church was then built in 1936 at a cost of £6100; it remains active to the present day.

In the Appendix is an article written in 1957 by the Cooke’s grand-daughter Ethel.