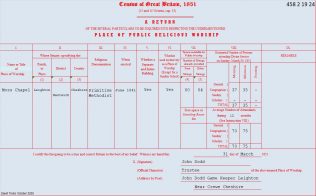 zoom
Leighton: Return from the Primitive Methodist chapel in the 1851 Census of Places of Public Religious Worship
transcribed by David Tonks

“Leighton Moss — Our cause was introduced into this neighbourhood by some of our venerable fathers and founders of the Connexion, long before Burland itself was missioned.  And although more than twenty years have rolled their rounds, we have never wanted for an Obededom in the neighbourhood, in whose house the Ark of the Covenant has found a rest­ing-place.

However, our friends there thought they wanted a chapel, and set about it in good earnest.  A piece of suitable land was purchased, and a chapel twenty-four feet by twenty-two, with a cottage annexed, was built thereon.  This chapel was opened on Sunday, June 20, 1841, by Mr. John Graham, from Tunstall; and on Sunday, June 27, by Mr. Jas. Bourne, from Bemersley.  The congregations were large, and the collections considered liberal.

The chapel and premises are settled on the Connexion.  Total cost of premises about one hundred and eighty pounds.  Debt now remaining, one hundred pounds.  The annual rent of the cottage and garden is three pounds three shillings.  The seats in the chapel are all let, and more are wanted.  This chapel is already too small, and our friends are about to enlarge if.  By this time it may be said, “What hath God wrought?”

By 1851 the chapel was doing well.  Average attendance at morning and afternoon services in that year was around 70 – 75 nearly filling the chapel to capacity. The Return to the Religious Census of that year was completed  John Dodd, a gamekeeper.

The chapel was closed in 1899. The Society transferred to the newly erected Crewe, Bradfield Road Chapel, and the old chapel was sold to James Wood of Willaston in Nantwich.

Location: OS 6″ plan 1899 at GR SJ695579. It has disappeared by 1908 and the location in 2011 is a modern housing estate, opposite Mablins Lane Community Primary School playing field.