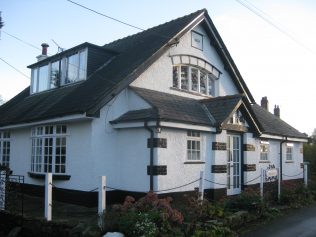 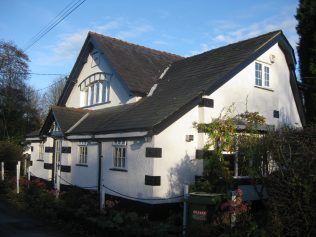 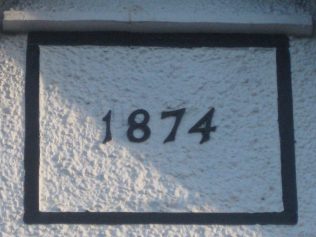 zoom
Date plaque at Lower Withington Primitive Methodist chapel. There may have been a chapel before this, from 1847
Elaine and Richard Pearce November 2014 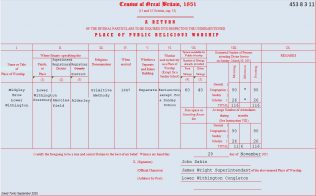 zoom
Lower Withington: Return from the Primitive Methodist chapel in the 1851 Census of Places of Public Religious Worship
transcribed by David Tonks

Lower Withington Primitive Methodist Chapel (former address may have been Old Withington) is only a few miles from Mow Cop in Cheshire.  As far as I can judge, my ancestors were founder members and lived on a farm nearby.  My grandfather (Herbert Walker) and his family were key members and he played the organ.  His three children attended there.  His youngest child, May Walker, was my mother.  My brother, my sister and I also attended there as children.  Even though my grandfather was bandmaster at the large Wesleyan church a couple of miles away, as far as I can judge, he remained a ‘Prim’ at heart until he died in the early 1950s.

We held camp meetings with the music led by Lower Withington Brass Band and my grandfather conducted, the preacher stood on a farm cart and we had a fabulous time.   The Prim Chapel closed soon after my grandfather died and was converted into a house.  Most of its members moved to the Wesleyan Church down the road.  I am interested in the early history of the chapel, built around 1875.

I have found the reports of meetings in the Chester archives from c. 1945 up to the time of closing, but have not been able to find anything from 1875-1945.  It is possible that they are stored elsewere; possibly somewhere in the Congleton Circuit?  Can anyone help?  Is there an archivist in the Congleton Circuit?  Any help would be appreciated.
What a wonderful Web Site.