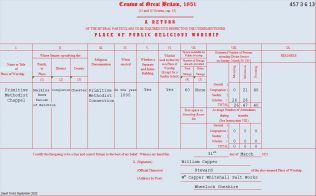 zoom
Malkins Bank: Return from the Primitive Methodist chapel in the 1851 Census of Places of Public Religious Worship
transcribed by David Tonks

Malkins Bank was first missioned in 1844 and the society met in a small house, then a small room (costing £2 a year). It was the only place of worship in the village.  The Return from the Primitive Methodist chapel in the 1851 Census of Places of Public Religious Worship does call this a chapel, separate and used only for worship.

In 1857 a plot of land was made available by J Blackwell and C Dickinson and the foundation stone was laid on May 30th 1857 by C Dickinson and R Dutton.  400 sat down to tea.

The chapel was closed in 1969 and subsequently sold. There is no evidence of it on Google Street View in 2016.  The large salt works has also disappeared.