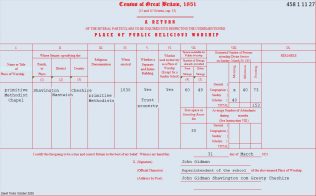 zoom
Shavington: Return from the Primitive Methodist chapel in the 1851 Census of Places of Public Religious Worship
transcribed by David Tonks

The building of a chapel was proposed in July 1830 and on 4th October the ground was marked out. No date for the actual opening is given, but we are told that the preachers at the opening services were  Hugh Bourne, James Bourne and Thomas Bateman on the Sunday, and on the Monday Elizabeth Allen.