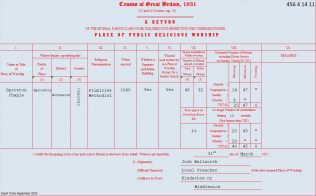 zoom
Sproston: Return from the Primitive Methodist chapel in the 1851 Census of Places of Public Religious Worship
transcribed by David Tonks

The opening in 1840 of the chapel at Sproston in the Congleton circuit is described by W Chubb in the Primitive Methodist magazine, transcribed in the attached document by David Tonks:

“Sproston Chapel – Some years ago the P. M. ministers introduced the gospel, with good effect, into the neighbourhood of Kinderton, a township lying in the vicinity of Middlewich and Holmes Chapel, or Church Holme. The worship was held in Bro. Heath’s house, at Moorsbarrow Hall, on sabbath days; and at Mr. Cook’s house, in Kinderton, on week-nights.  But Bro. Heath resigning his farm put us to some difficulty in obtaining a place of worship for the Sundays.  This being the case, our friends resolved on building a chapel for the better accommodation of the people.  A piece of freehold land was purchased at Sproston; and, with the kind assistance of numerous friends, a neat chapel was erected, twenty-four feet by eleven.  In was opened for Divine worship in August, 1840, by Bro. James Bourne, of Bemersley, and P. Morgan, of Macclesfield.  The services were well attended, and the collections were liberal.  This chapel is Connexional, is in comfortable circumstances, and in it we have a good sabbath school.  The Lord be praised.  Amen.

Our grateful acknowledgements are due to many friends, who variously contributed to the erection of both these chapels; and we trust they will hereafter receive a full reward”

The 1851 census of Places of Public Religious Worship contains an submission by local preacher Josh Wallworth about Sproston chapel on that Sunday. 14 people and 6 children attended the morning service and 47 the service in the afternoon.

There is a Primitive Methodist chapel marked on the 1875-6 1:2,500 Ordnance Survey map of the area towards the the south of the parish, at the junction of Brereton Lane and Jones Lane.  Is that the 1840 chapel?  The building is still there in 1898 and 1909 but unlabelled. It has disappeared by 1966 and there is no sign of it on Google Street View in June 2011.