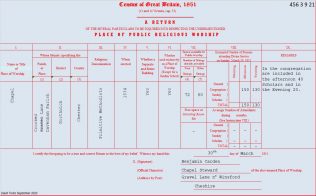 zoom
Winsford: Return from the Primitive Methodist chapel in the 1851 Census of Places of Public Religious Worship
transcribed by David Tonks

Gravel is an area of south Winsford.  The 1851 Census of Public Religious Worship contains a return from the Primitive Methodist chapel in Crooked Lane – corrected from Gravel Lane – in Davenham parish,  The return is completed by the steward, Benjamin Carden of Gravel Lane.  The date of the chapel is given as 1834.

The laying of the foundation stone for a new, larger chapel at Gravel Lane is recorded in the Primitive Methodist magazine of 1864 by J Clarkson. This cites the date of the first chapel as 1836, not too far from the date in the Census so likely to be the same chapel.

Where was this chapel and what happened to it?  It does not appear on the circuit plans on this site for the Nantwich and Crewe Circuit

“Foundation-Stone Laying at Gravel Lane, Nantwich and Crewe Circuit.— This place was first missioned by Mr.Robt. Hill, then in the Preston Brook Circuit, about thirty-four years ago. Very soon after this, Mr. John Hallam, of this circuit, preached here, and since that time it has belonged to this station.

In 1836 a chapel capable of accommodating 200 persons was built. For some years past our efforts have been crippled for want of a larger place of worship. We have often tried to obtain a suitable piece of land on which to build a new chapel ; but tried without success until lately.

Providentially a suitable site has at length been purchased. It is on the principal road leading from Winsford to the railway station, contains 410 square yards, and has cost £46. The intended chapel will be 14 yards long by 12 yards wide, 25 feet from floor to ceiling, and the floor 2 feet above the land. It will be a neat structure of red brick, with corridor entrance in the middle of the front, will have a front gallery, and will be capable of seating comfortably 6OO persons. There will be a school room at the end 12 yards long by 5 yards wide, and there will be a little spare land at the side, sufficient for the erection of a house or for the enlargement of the chapel in the future.

On a Monday in July the foundation stone of the chapel was laid. A large concourse of people assembled on the ground, and soon after three o’clock the ceremony commenced. Mrs. Allen, of Tunstall, laid the stone in the name of the Holy Trinity. Mr. T. Bateman, of Chorley, delivered an address suited to the occasion, which highly interested the audience, and a collection was made on the ground, which amounted to £8 16s. 10d., being commenced with £5 by Mrs. Allen.

At the conclusion of this very interesting ceremony the friends retired to the Winsford town hall for tea, to which about 450 persons sat down. After tea a public meeting was held, when the town hall was well filled. Mr. S. Heath, of Crewe, presided, and Mr. T. Bateman, Mr. S. Heath, jun., and Revs. J. Guest, J. Quarmby, R. Turner, and the writer, took part in a highly interesting service.

The chapel will cost about £700, including land ; and we expect by begging books, the sale of the old chapel, and other efforts, we shall be able to realise more than £250, towards which we have in hand about £130. J. Clarkson.”