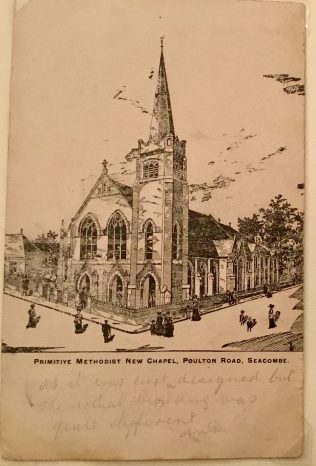 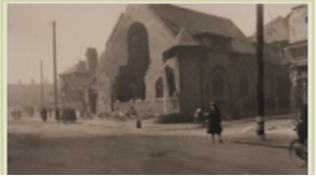 In 1923, the PM Conference Handbook described Seacombe as, ‘a church with a future’.  It continued, ‘The first church was erected in 1868 and the present school-church in 1907.  It has a membership of over 300 and nearly 600 scholars and the main church building is being anticipated.’

The postcard opposite is fascinating, as it shows a church that was never built!   It clearly shows the original architect’s design for the new building in 1907. Tantalisingly, someone has written ‘As it was first designed but the actual building is quite different’.

Chris Wells has researched the story:-

‘WALLASEY is a parish comprising the townships of Wallasey, Liscard and Poulton-cum-Seacombe.’

‘POULTON-CUM-SEACOMBE is a township, 1 mile south by east from Wallasey; in 1841 had 371 houses and 2,446 inhabitants.  Population in 1801, 178; in 1831, 1212.  SEACOMBE, the most populous part of the township, is situated on the banks of the Mersey, opposite Liverpool, and commands a striking view of that port and the shipping.  The hotels and taverns afford every accommodation to the multitude of visitors brought over here by the steamers.’

I have not been able to find a definitive history of Primitive Methodism in this area; what follows has been pieced together from various sources.  A description of all of the societies and PM chapels in Seacombe is given in the download below.

Early 1900s:  The History of Wallasey states that early in the 20th century, the Prims leased buildings in Brighton Street from the Salvation Army for a Primitive Methodist chapel and school.  This is confirmed by a 1908/9 25” map which shows the Brighton Street/Shaw Street building labelled ‘S.A. Hall’.  I wonder whether, in about 1900, the society decided to build a new and larger chapel (in Poulton Road); they sold their Brighton Street chapel to the Salvation Army to raise early funds but then leased the premises back until the new chapel was opened.

1907:  A 1923 booklet states ‘Seacombe is a church with a future.  The first church was erected in 1868 (the one in Brighton Street) and the ‘school-church’ was erected in 1907 in Poulton Road Seacombe at the junction with Northbrook Road.’

About 1920:  The History of Wallasey says: ‘After World War One it was decided to open a new chapel.  A site was obtained in Poulton Road, Seacombe, on the corner of Northbrook Road [this seems to be wrong – the Prims already had that site with the first chapel on it].’

A 1935/6 25” map shows what had happened. The new chapel had been built onto the south side of the 1907 chapel which had itself been converted into a Sunday School.  The new chapel scaled at about 60 ft square.

1940:  The listing of Methodist Buildings gives the statistics of this chapel: built of brick, seating for 600 in pews, and having three school halls and eleven other rooms.

1941:  In March the church was destroyed during an air-raid (see image).