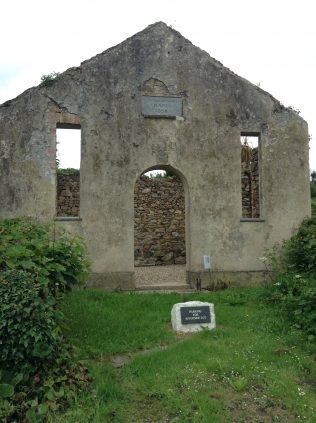 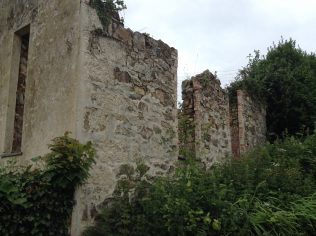 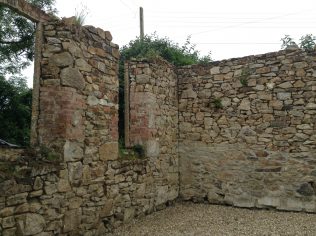 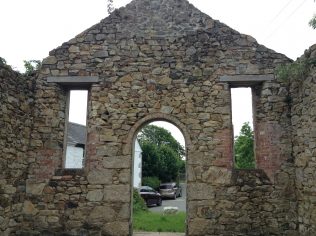 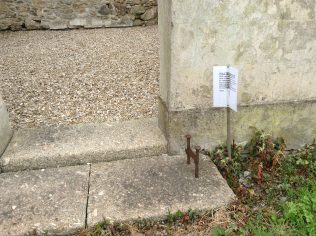 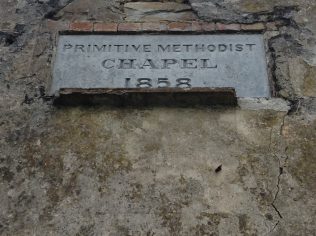 T Pascoe writes in the Primitive Methodist magazine of the laying of the foundation stone at Cockwells Primitive Methodist chapel in the Penzance circuit. He had been appointed in 1857 to mission the village and, encouraged by the attendance at an outdoor meeting by a furze rick, arranged for meetings in a barn.

The foundation stone was laid on Sunday September 6th 1858 – it was a bright sunny day; “the air was redolent with the perfume of wild thyme and heath”; there were “players upon instruments”. The sermons were given by T Pascoe, C Kessel and Mr Powell.

The actual opening is described  by E Powell in the 1859 Primitive Methodist magazine.

There are pictures of the chapel here and here on the Geograph website. It has been out of use since 1940 and is now a ruin. The owners of an adjacent house have bought it and are sympathetically preserving and stabilising it.

Location of the Chapel

Cockwells, is a small hamlet, situated near to Crowlas in the Penwith area, on the busy A30 road leading to Penzance. Today it is an area surrounded by fields, farming everything from daffodils to broccoli. The chapel is situated off this road, at a major bend. Adjacent to the chapel is a row of small cottages (post code TR20 8DD).

It would seem that a T PASCOE was appointed to mission the area in 1857, and visited house to house, leaving tracts and inviting people to a service. It was reported that he had a “tolerably large and deeply attentive congregation”. He preached stood near a furze rick (from my research a stack of gorse from field clearing and used on fires – a prickly platform?). The spiky platform must have inspired PASCOE, as there was a great intent amongst the people, who asked for two services on a Sunday and a midweek one.

The fledgling congregation used a barn over the winter, and as it was too small, it was decided a chapel would be built. The present owners state from their research, it took four months and was hard work and many a deal was done to achieve this. One person gave the land (I cannot find who, will need to look at tithe maps), and Mr RV HOSKING ( a Wesleyan class leader) offered the congregation as much stone as needed. The men collected 50 loads of stone, as well as clearing the site and digging the foundations, whilst others lent a hand in the fields with the harvest, so they could get the loan of horses to aid the transportation of the building materials. Also £20 in cash was raised. On 28 September 1858, the foundation stones were laid. It was reported it was a fine day, “the air was redolent with perfume from wild thyme and heath which grew luxuriantly in the neighbourhood. It was also reported, “The players with instruments were present and the sound echoed back from the valley”. T PASCOE then gave the first sermon. On 19 December 1858, the chapel opened and ministers of several denominations were present. The cost was £130, with £60 of it remaining as debt.

The trustees were Penzance men, who were also on the deeds for the nearby Madron. They were Robert THOMAS (coach builder), William PENHALIGAN (hairdresser), Joseph CLEMENTS (warehouseman) and Benjamin BOSENCE snr (Wool-stapler), plus Thomas PASCOE (Miller – was he the T PASCOE also preacher? Very possible I think) and William GILBERT (Smelter) from Gulval. Probert says his research suggests this shows there was a lack of leadership, as the same names appear connected with several chapels. As said, nearby was the Madron society which existed from 1830, and its chapel closing in 1916, and Ludgvan which as a society existed from 1830 to 1880s with possibly a chapel built in 1838, in the Lower Quarter area which adjoins Crowlas, and which Cockwells is just to the south. It would seem, when I researched online, our chapel keeps being referred to as Crowlas. This is a modern misunderstanding and Probert, from his research clearly shows it to be named Cockwells.

Activities included TeaTreats, with buns baked by the ladies, and the children would parade around the village and farms taking two hours to walk. One year they could not afford a band, so a touring German group (very popular in late 19th Century) were paid 30 shillings plus free tea. Anniversary services were held outdoors, with wagons as platforms for the children. Also mentioned was a Christmas Endeavour – but I have no idea what this was. The present owners (2017) put a Christmas tree in the chapel doorway each year – maybe that’s similar to what occurred?

By 1936 the congregation was down to two and four years later in 1940 it was closed and used as a store. Of interest is that the main Primitive chapel was (and still exists) St Ives, and in 1851 Rev BOOTH (later General BOOTH founder of the Salvation Army) conducted a mission there. The present owners have sympathetically cleared the site, revealing the walls and ensuring these and the lintels were repaired. They have possible long term plans but they will ensure the building lives on. The photographs of the building show it to be a square building, of rubble stone, with some brick in the lower portion of the windows. The doorway has a carved slate plaque denoting the date, and the door step remains with an iron boot scraper.