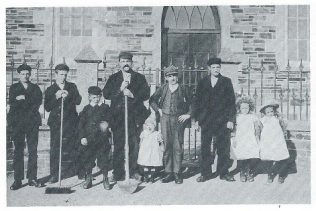 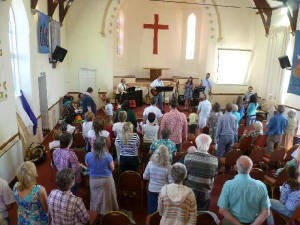 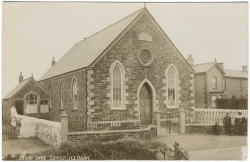 zoom
Broad Lane Primitive Methodist chapel as it was in 1900 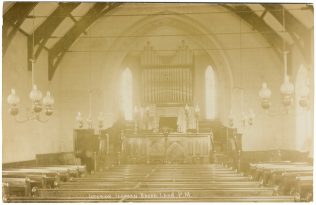 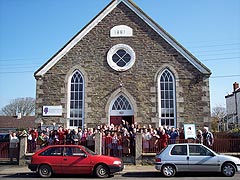 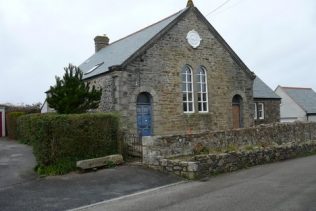 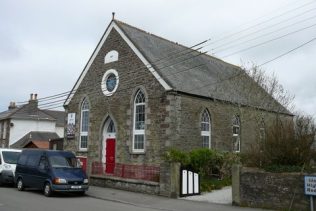 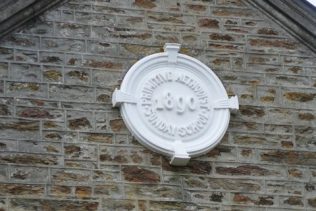 The Church now meets in what was known as Broadlane Primitive Methodist Church, and in 2013 celebrated its 10th anniversary at the chapel (though GCC has been going much longer).

It must be remembered during the period being described, that Redruth and Illogan (which as a parish stretched from Godrevy and Porthtowan to Forest on the far side of Four Lanes), was a mixture of rural and industrial. Redruth was like a Wild West town, lawless with poor and deprived people. Half the town we know today was mines, and work was not consistent, with mines failing or closing due to tin prices.

Yet there were good works and Churches built (not just Methodist but C of E also) along with schools and hospitals and the dreaded Work House. It was a hard life for many. The people mentioned here are the named ‘middle’ people who were able to ensure the promotion of the Word in the area and had the connections, but the congregations were made up of many who had hard lives (husband and wife and children all sometimes worked) and gave their time and talents to build and populate these places. Through these places they also gained not only a faith but an education (reading writing music etc).

Until the rise of Methodists, the only Church in the Illogan parish was C of E.

The Quakers arrived in the late 1600’s and had a meeting house in Redruth (the building exists off Church Lane, later to become the local Apostolic Church)

One family was the TANGYES (Joseph and Anne 6 boys 3 girls) who occupied land opposite and around the now chapel.  Mr Joseph TANGYE was fined on several occasions for not attending the Parish Church, having instead walked the 2 miles into Redruth, to attend Quaker meetings.

His sons (Richard, Joseph and George) were destined to be Engineers creating the world famous TANGYE Bros of Birmingham, designing and building engines and hydraulic jacks. I K Brunel’s ship, The Great Eastern was stuck whilst trying to be launched in 1853, and it was their jacks that moved it, and in their words,

We launched the Great Eastern and she launched us.

One of the boys, Sir Richard, became a local JP and MP. He gave £50 to the building of the present chapel. (He was also the great-uncle of film maker Sir David Lean).

They attended the Lady Bassett School (still standing behind Trevenson Church and is the original Pool School!) before leaving Cornwall for further education.

Also in 1740’s Methodists began to creep into Cornwall.

Charles WESLEY came to Illogan in 1743, 3 times. Preaching at Illogan Downs near to our chapel (3rd Sept 1743) and later Tuckingmill (having been chased out of the Parish by the Warden…who then spent parish funds on a celebration)

John came the same year 13th August. (the road Knave go By in Camborne is named after the route he took later to avoid the Camborne Parish en route to St Ives… the local Anglicans referring to him as a Knave)

The first Methodist societies in our area started at Tuckingmill, Bridge and Carnkie (Redruth).

The Cornish population doubled between 1750 and 1850 due to mining, and there were several revivals (1764, 1782, 1799, 1814 and 1832) The Illogan Parish Church even agreed service times so that people could attend both the Parish Church and the Methodist meetings.

There were weekly class meetings at Roscroggan, Tolvaddon Downs, Illogan Downs, Lower Melrose, Pool, ,Blowinghouse/Grenifer (in the valley behind us…and the base of the meeting house remains built next to the old stream works), Condurrow, Pengegon and Illogan Highway.

Many meetings were in private houses or roughly built buildings. One such building was up the road from our chapel. You will remember it as Balls Feed Store, where the new houses at Mill Grist Meadow stand. This was Ebenezer (1839 a daughter chapel of the Bridge/Illogan Downs/Vougebeloth society).

Famous of the Bridge society was Thomas GARLAND (b1771) who worked between Illogan and Porthtowan.

A hymn was sung one day, composed by him

“Give me my sins to feel
And then my load, remove
Wound and pour in my wounds to heal
The balm of pardoning love”

The Primitive Methodists arrived in Oct 1825 and sought to revive the original Methodist aims.

The Methodists had split in to various groups in the 1840’s and our area included Bible Christians also.

A local leader TURNER invited a founder of the Primitives, William CLOWES, who preached locally (though strangely no one invited him home for a meal after one service and he sat on top of Carn Brea eating berries. Strangely his must have been at home as the hill is similar to the Mow Cop in Staffordshire where Primitive Methodists often met). His visit increased Methodist members in Illogan from 100 to 250 in just a few weeks.

The Primitives expanded in the area at Tolgus, Blowinghouse, Illogan Highway, Carnkie and Broadlane. An attempt was made to build a chapel in the Broad Lane area in 1840, when £10 was paid to a builder and attempt made to obtain the Illogan Reformers Chapel.

Permission was granted in 1856 to build the first Primitive Chapel.

In 1859 the Broadlane society built the first chapel for £58 13s  4 1/2d and had a debt of £32 2s  7 1/2d, and the lease of the land was held for the Cornish lease of 3 lifetimes and is possibly of wood and stone construction but I do not have those details. It was situated where the old Sunday School of 1890, now stands. Between 1859 and 1866, various improvements were made, with new flooring, pews (for up to 130 people) and windows. This chapel was known local as LITTLE SUMP CHAPEL. This original building was demolished in 1889 to allow the building of the new Sunday School. The Sunday School Tea Treats, went out via an archway (I think the adjacent bridge for the GWR Portreath branch line) to fields now occupied by bungalows.

A new chapel was built in 1887 and the school room across the road in 1890 on the site of the first chapel. It was 45 x 36 feet. The architect was Mr Whetter, and builder Mr (later Sir) Arthur Carkeek of Redruth. The granite edging came from Portreath (a small but important port a mile or so away) and the rest of the stone from West Tolgus (an area adjacent to the chapel).

The memorial stones were laid on 18th May 1887, with the Sunday School children placing gifts on top (as was the tradition to gather gifts towards the building fund locally). One stone (and we do not know which one) is hollow and contains time capsule items inside.

A Harmonium was bought and John Harris employed as organist for £3 a year.

It was enlarged in 1891 (another history puts it as 1893) with the back wall pushed back 16 feet and vestry added. In 1905 alterations occurred again, when the organ from the original Plain an Gwarry (Redruth) chapel was bought for £100. In 2013, with renovations being done to the rear of the chapel, we found that the curved back of the chapel (built to accommodate the organ) sat on the back boundary wall, and large slabs of granite placed between the chapel and on the wall to hold up the organ. The organ is long gone, but the home spun building still exists.

In 1895 the freehold of the two sites was obtained from Lord Robert of Tehidy.

The chapel was often short of money, and had various ways of fund raising. This included each member given a bag to fill with coins, one for each year of life. They also sold on items, including a lamp. Pew charges ( 1897) were 9d for main pews per quarter, with sides at 6d and others free dependent where they were. Despite being short of money they did hire an organist at £1/10/o a year. They also bought sixty two (62) Umbrella stands in 1906, fitted gas lighting in 1912 and electric in 1929.

They also challenged others, with one story from 1889 with two drunks who disturbed the service being told to pay 10/- to the Redruth Miners Hospital, or get summonsed to the Magistrates Court. This is an offence under Ecclesiastical Courts Jurisdiction Act 1860 (persons found guilty of making a disturbance in churches, chapels, churchyards, or burial grounds.). I have used this legislation myself. The offenders paid up.

1. Thomas Merritt……the composer (celebrated every year with carols outside his home just up towards Treloweth School and grave at Illogan Parish Church)….baptised in the old Broad Lane Primitive Methodist Chapel in 1859, which later became Broadlane Methodist Chapel. (I think it was when the Primitives Bible Christian lot etc. got back as one denomination.) …the fore runner of our present Grapevine chapel. He composed carols which are still sung by the Cornish worldwide, hymns and organ music. He also composed a march that was played at the coronation of King Edward 7th. He was organist at the nearby Chili Road and Illogan Highway Methodist Chapels.

2. Of the names outside on the stones (believed to be Trustees and supporters)

Capt Richard PRYOR of Trefula, Redruth….a well-respected and trusted Mine Captain and Manager who took on difficult and failing mines ie. St just United mine, Cape Cornwall, Wheal Damsel at Gwenapp…..he also allowed land to be used for tea treats and services

Capt. C F BISHOP of Redruth (Charles Bishop I think) Mine Captain and manager at Wheal Grenville, a major mine in the area

It was an ANNE TEAUGE from the same family who married Trevithick Snr…….and became mother to Richard Trevithick.

Capt. John DADDOW was a mine agent, and Capt. William RAMBLING possibly also a Mine Agent. I have found nothing, other mentions as being mine captains, and active supporting other chapels.

William HARRIS was a leader and Harmonium player. His eldest son (also William) would not attend services unless he had first spent time privately with God. To him the whole world was his Father’s house and it was not unusual for him to tie up his horse and hop into a field to pray!

Along with John and William HARRIS and John DADOW, others who were trustees, were Francis SHERMAN and Capt. John HOSKING (also a circuit leader)

It would seem that they and others, broke the yoke of the official church, and gave to promote the word in many areas including Illogan.

As we know the Sunday school is across the way and now being converted to a house.

In recent history, the chapel closed in the 1990’s, opening once for a wedding. In 2000/2001 a group from the Redruth Apostolic Church took over the chapel with the aim of re-establishing their congregation, and for a time Redruth Baptist Church supported them, opening for coffee and even had thoughts of church planting.

It was obvious God would not let this place go and knew the need for a congregation to be here. It was then that RAC and RBC approached Grapevine Community Church, which was meeting in a local school, and GCC took on the chapel, and Gods work continues unbroken.

At Easter 2013, Grapevine celebrated 10 years of being at Broadlane, and we give thanks not only for all those who in the past worked hard to establish the chapel, but kept Gods presence in the area.

The whole story can be found in Thomas Shaw’s books,  A History of Cornish Methodism, Methodism in Illogan, and Methodist guide to Cornwall; as well as J.C.C. Probert’s Primitive Methodism in Cornwall.