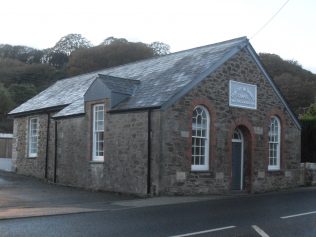 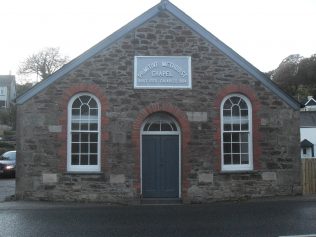 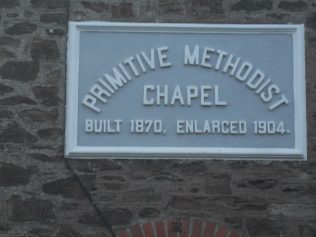 The unusual name of this Cornish village, ‘London Apprentice’, first appears on a map in 1747, and appears to come from the name of an inn, which may have been based on a popular ballad of the time. The inn, and the hamlet which took its name, grew up as part of the tin mining industry.

It was some time in the 1830s that a Primitive Methodist mission came to this area and the first society was established. It was not very successful and ceased to meet in 1846. A new society started in 1849, and services were held in the house of Walter Coombe.

The Chapel was built in 1870, and enlarged in 1904 when the Sunday School was built. It was called New Mills, the name by which this hamlet became known in the 1830s, about the time when Primitive Methodism reached this area.  It is not clear whether the name related to a corn mill or tin-stamping mills.

Evelyn Amos-Wyatt (nee Sanders) started attending the Chapel and Sunday School  with her five brothers and sisters, when they moved into the village in 1948.  Queenie Bazley (nee Oliver) remembered the little red Sunday School hymnbooks and Sunday School Anniversary, which was a very special day. The boys and girls sat on a platform and each said a poem. The preacher would call each child by name. The following day would be the Tea Treat, with lemonade and a big saffron bun. The children would march through the village behind the silver band. In front would be the Sunday School banner, carried by two young men. It said ‘New Mills primitive Methodist Sunday School, established 1871, and had a picture of an open Bible in the middle.

Michael Barnicoat also remembered going to Chapel: ‘it was Sunday School in the morning, afternoon service, and evening service.’ Sunday School Anniversary always took place on Whitsun weekend, and he also had happy memories of the Monday when ‘we were given a lovely tea, and sports in the field opposite the Chapel.’

‘Anniversary took weeks of getting ready’, said Gladys Hawke (Beckly Pollard) ‘We all had pieces to learn, and would sometimes sing a verse of a hymn on our own. There was an adult choir in the evening. People from other Chapels came. On Mondays, in the early days, I can remember marching behind the band and banner to Trewhiddle.’

Gladys and her family went to Chapel three times on a Sunday. They wore their best clothes, and had to change each time they came home from Chapel. Sunday was a special day because ‘Only the meals were cooked: all preparation was done on Saturday. We didn’t sew, knit or play ball. We played family games in the evening. Some people sang hymns around the piano.’

Her mother, Mrs Winnie Pollard, remembered John Edward Stephens being the Sunday School Superintendent. ‘He was so strict, if you misbehaved he would just stare at you.’  Her father, Harry Bekley, used to blow the organ by hand, and if choir practice went on too long, he would blow less! The choir stalls were full in those days, and the choirmaster was John Williams.

As Ruth McKee (Sanders) said, ‘The Chapel and the Sunday School were the main sources of entertainment in those days.’ The Wesley Guild was held on Wednesdays in the winter, and once a month was a ‘social evening’. She remembers the fun of ‘Treat’ day on Whit Monday, when the teenage boys and girls would play ‘Kiss-in-the-Ring’ in the evening!

For Ken Stark, ‘the little chapel was very much the centre of activities at times.’ Speakers at the Guild came from such far away places as Trewoon, Polgooth or Pentewan! ‘I remember the refreshments best, and it seemed it took the boiler all evening to get the water hot for tea!’

The Chapel closed in 1993, and was used initially as a warehouse, but, as you can see, its appearance has been little changed.

Christine Young, Memories of our Childhood in London Apprentice, 1997