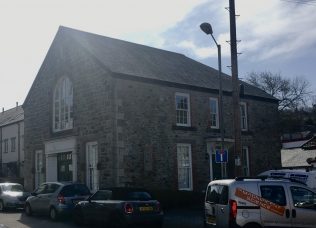 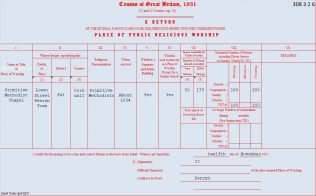 zoom
Penryn: return from the Primitive Methodist chapel to the 1851 Census of Places of Public Religious worship. Return no: 308 3 2 6
transcribed by David Tonks 2021

However, in 1860, following the initiative of Bro. R Killingrey, they bought and demolished a house at Fish Cross and in its place built a chapel.

Possibly the most interesting part of the account is the description of the social make up of Penryn before and after the arrival of the Methodists.  “Penryn is a borough town in Cornwall, containing about 4,000 inhabitants. Before the Reform Bill was passed it returned two members to Parliament. The social and religious state of the town was very different then from what it is now. There were then, strictly speaking, but two classes, the rich and the poor. The honourable and useful middle class had then, comparatively, no existence in Penryn. Aristocratic elements and influences were powerfully predominant. Such a state of things, opposed at once to the religious interests and social progress of the people, now no longer obtains ; a numerous class of respectable shopkeepers, thriving traders, and rich merchants, has been raised up, and they are actively concerned for the sanitary, social, political, moral, and religious wellbeing of the town. The several churches of the place are most fraternal in their intercourse with each other.”

The chapel was built at the bottom of St. Thomas Street. Later it was acquired by Roman Catholics and damaged by bombing in 1941.