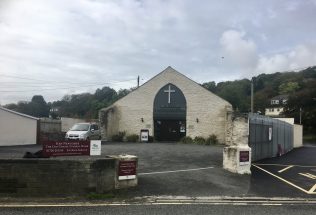 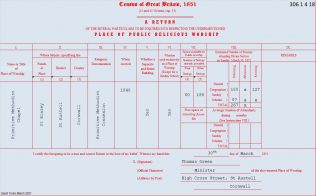 zoom
St Blazey: return from the Primitive Methodist chapel to the 1851 Census of Places of Public Religious worship. Return no: 306 1 4 18
transcribed by David Tonks 2021

The return from the Primitive Methodist chapel in St Blazey to the 1851 Census of Places of Public Religious worship wascompleted by the minister, Thomas Green. He reports that the chapel dated from 1840 and held268 people. On Census Sunday, 180 attended in the morning, along with a Sunday school of 87 scholars, and 127 attended in the evening.

The laying of the foundation stone for a replacement St Blazey Primitive Methodist chapel is recorded by J Bennetts in the Primitive Methodist magazine of October 1860.  The old chapel had become too small and dilapidated so they decided to build anew. The new chapel was planned to be 54′ x 38′ and 22′ high.

Cornwall County records tell us that the chapel, called Ebenezer, was first built between 1836 and 1840 on the site of a pre-1832 Mission Hall. It was  rebuilt in 1860 and the late 19th century and demolished 1992. The rear of the site is shown on Street View as in use by a funeral director.

There is a photograph of the later building here.