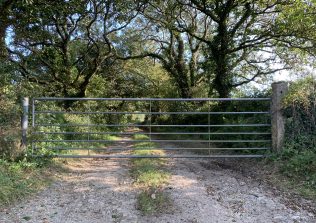 Following the road parallel to the A390 out if Truro, passing Trevaskas on the right you come to an old crossroads. If you took the left turn here ( the gate is usually shut as shown) and then a left on an old track towards Little Regarded, this would have led you to a Primitive Methodist Chapel, marked only on very early maps with the site in the corner of a field
Symons records a Primitive Methodist chapel on the South side in a field (1884).
This building is still present on 1887 maps but gone by 1907 and no further history can be found. This is likely to have been the precursor to the second Primitive Methodist Chapel (also marked on 1880 maps) which is north of the road a little further on.

Kresen Kernow also records the existence of a Mission Church in Tregavethan with records from 1910 – 1959. There are no other buildings marked on maps and I wonder if this was part of this Church